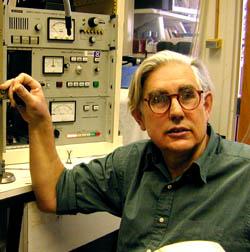 The Section on Structural Cell Biology uses advanced light and electron microscopy in conjunction with biochemistry to address important questions in cellular neurobiology. Current projects are focused on the structure and function of the post synaptic density and the molecular machinery for transporting proteins in axons. The molecular architecture of isolated PSDs is investigated by a novel immunogold/replica technique while the structural plasticity of intact PSDs is examined by thin section electron microscopy. Previous observations on post-mortem accumulation of CaM Kinase II on isolated PSDs led us to explore its accumulation in intact neurons. Sustained activation of glutamate receptors causes a reversible overall thickening and accumulation of CaMKII on PSDs. Exposure of neurons to energy-depleting conditions and excitotoxic stress promote similar changes, but now CaMKII also appears in discrete clusters throughout the cell. These clusters have been isolated and shown to be essentially composed of CaMKII. We are, thus, uncovering a mechanism that could protect the neuron during excessive activity by decommissioning CaMKII while maintaining calmodulin trapping. The conditions for and function of accumulation of CaMKII at PSDs are under investigation.

The project on axonal transport is concerned with determining how essential proteins are transported in axons. Transport of fluorescent probes injected into living squid axons is measured by confocal microscopy. We have recently been able to demonstrate the slow transport of polymerized tubulin and neurofilament proteins in living squid giant axons as well as the existence of a transport system able to move tubulin in its unpolymerized, soluble form. We are now testing the potential roles of kinesin, myosin and dynein motors in the transport of the various soluble and polymerized axonal proteins that are necessary to the development and maintenance of axons.

Dr Reese received a B.A. from Harvard College and an M.D. from Columbia College of Physicians and Surgeons. After a medical internship at Boston City Hospital he came to the NIH as a Research Associate. Except for a postdoctoral Fellowship in the Department of Anatomy at Harvard Medical School in 1965, Dr. Reese has remained at the NIH where he became a Section Chief in 1970 and a Laboratory Chief in 1983. Dr Reese was elected to the National Academy of Sciences in 1987. His research is on the basic cell biology of the neuron, particularly synapses and axonal transport.

This page was last updated on November 7th, 2013