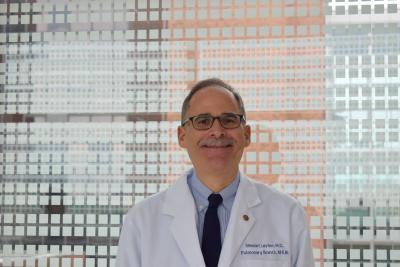 Laboratory of Asthma and Lung Inflammation

Asthma is a common disease that affects 300 million people worldwide. The pathogenesis of asthma involves airway inflammation, as well as airway remodeling and hyperreactivity, which leads to difficulty in breathing which can be deadly if not properly controlled. Steroid medications can successfully treat asthma in most cases. However, the side-effects of long-term steroid administration can be profound, and in the approximately 5% of patients with severe refractory asthma, these medications fail to adequately control the disease. Dr. Levine is focused on developing new treatment approaches for patients with severe asthma.

In a mouse model of experimental asthma, Dr. Levine's laboratory exposed mice to house dust mites (HDM). Using a genome-wide analysis of the lung transcriptome, Dr. Levine and colleagues have identified genes that are upregulated as a result of the disease and whose activity is not modulated by the administration of corticosteroids. Of the 68 steroid-unresponsive genes discovered through this approach, the Levine laboratory initially focused on one that had not been previously implicated in the pathogenesis of asthma, apolipoprotein E (ApoE).

Dr. Levine’s group has shown that ApoE, which is made by macrophages in the lung, binds to low density lipoprotein receptors (LDLR) that are expressed by ciliated airway epithelial cells. In doing so, ApoE attenuates airway remodeling (mucous cell metaplasia) and airway hyperreactivity. Moreover, he has demonstrated that the administration of a small ApoE mimetic peptide to HDM-challenged mice markedly attenuates the three key pathogenic features of asthma: airway inflammation, airway remodeling, and airway hyperreactivity.

In related studies, Dr. Levine is working with colleagues at the NHLBI to study the role of peptide mimetics of apolipoprotein A-I (apoA-I) in their murine model of asthma, as well as the role of apoA-I pathways in asthma pathogenesis. Dr. Levine’s group has extended these findings to asthmatics, where they have shown that increased serum levels of high-density lipoproteins and apoA-I are associated with less severe airflow obstruction. While furthering his research into the mechanisms that modulate disease severity in asthma, Dr. Levine is completing the next phase of preclinical work necessary to move the concept of an inhaled apoA-I mimetic peptide for the treatment of asthma from mouse models into the first human clinical trials.

A clinician-scientist, Dr. Levine supervises a clinical program to study severe asthma and advance promising experimental therapeutics toward patient use. He and his colleagues have an ongoing longitudinal study to better understand the progression of severe refractory asthma and its response to treatment. They also have a bronchoscopy study that allows them to collect fluid and cells from the lungs of asthmatics so that they can define the role of apolipoprotein pathways in the respiratory system. These studies will not only have direct clinical implications, but will also advance the basic side of Dr. Levine’s research program, leading to even further clinical progress and, eventually, the possibility of ensuring that everyone with asthma can manage it simply and effectively.

Stewart Levine received his M.D. from the State University of New York at Stony Brook School of Medicine in 1983. He did his internship and residency in internal medicine at St. Vincent’s Hospital and Medical Center in New York City and fellowships in pulmonary medicine at Memorial Sloan-Kettering Cancer Center from 1986 to 1988 and critical care medicine at the NIH from 1989 to 1995. He joined the NIH as a staff clinician in the Critical Care Medicine Department of the Clinical Center in 1995, became a tenure-track Investigator in the NHLBI in 1998, and was promoted to Senior Investigator in 2007. He also served as a Medical Officer in the United States Public Health Service and was the Medical Director of the NHLBI’s Upper Cardozo Pulmonary Clinic. Dr. Levine received the NHLBI Division of Intramural Research Orloff Science Award twice in 2012 and again in 2015. In 2015, he also received the NHLBI Director’s Outstanding Translational Science Award. He has authored or coauthored more than 90 publications. He is currently on the editorial boards of the American Journal of Respiratory Cell and Molecular Biology and Chest, and has previously served on the editorial board of the Journal of Biological Chemistry. He is a member of the American Society for Clinical Investigation, American Thoracic Society, American College of Chest Physicians, American Association for the Advancement of Science, and American Society for Biochemistry and Molecular Biology. He is a member of the NHLBI Institutional Review Board and serves as Vice President of the Metropolitan D.C. Thoracic Society. Additionally, he holds two patents from his work.