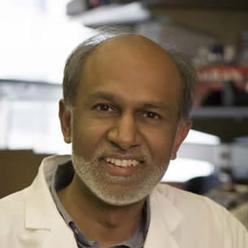 Section of Infections of the Nervous System

Neuropathogenesis of HIV infection : HIV reservoirs get established in the brain early during infection and current antiretroviral therapy does not impact the size of the reservoir. Our laboratory is focused on characterizing the virus in the brain by studying the mechanisms by which the virus enters glial cells and persists for extended periods of time. We have shown that the HIV-Tat protein is produced in the brain despite adequate antiretroviral therapy, hence we are trying understand its role in HIV pathogenesis and in developing means to block its effects. This is being accomplished by studying biological samples from a well characterized cohort of HIV-infected individuals and novel in vitro techniques for viral isolation and assays for viral protein detection and monitoring immune function in spinal fluid.

Role of endogenous retroviruses in neurological diseases :  Retroviral sequences remain dormant in the human genome and occupy nearly 7-8% of the genomic sequence. We have shown that one of these viruses termed HERV-K (HML-2) is activated in patients with amyotrophic lateral sclerosis (ALS), and transgenic animals that express the envelope protein of HERV-K develop ALS like symptoms. Hence, we are now using a wide variety of in vitro, and in vivo studies to determine the mechanism by which its expression is regulated and causes neurotoxicity to motor neurons. We are also developing new antiviral compounds and molecular techniques for blocking HERV-K.

Undiagnosed Neuroimmune and neuroinfectious diseases : Undiagnosed neuroinflammatory diseases carry a huge burden with devastating consequences. In collaboration with other researchers in NINDS and other institutes, we are investigating these patients and developing new diagnostic methods and modes of treatment for these diseases. An example of which is our observation that patients with Nodding syndrome have autoantibodies to a newly discovered protein in the brain, liemodin-1, caused by a molecular mimicry with a protein in a parasite, onchocerca.

Dr. Nath received his MD degree from Christian Medical College in India in 1981 and completed a residency in Neurology from University of Texas Health Science Center in Houston, followed by a fellowship in Multiple Sclerosis and Neurovirology at the same institution and then a fellowship in Neuro-AIDS at NINDS. He held faculty positions at the University of Manitoba (1990-97) and the University of Kentucky (1997-02). In 2002, he joined Johns Hopkins University as Professor of Neurology and Director of the Division of Neuroimmunology and Neurological Infections. He joined NIH in 2011 as the Clinical Director of NINDS, the Director of the Translational Neuroscience Center and Chief of the Section of Infections of the Nervous System. His research focuses on understanding the pathophysiology of retroviral infections of the nervous system and the development of new diagnostic and therapeutic approaches for these diseases.