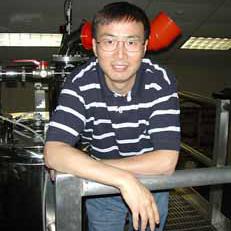 RNA function is coded in its three-dimensional structures and dynamics.  To characterize RNA in four-dimensional space, we have resorted to new technologies that allow us to study ever more challenging problems.  For this reason, our laboratory has developed Position-selective Labeling of RNA (PLOR) technology, which can be applied for structural biology studies, imaging and disease detection. We have also developed a new approach using X-ray free electron laser (XFEL) and time-resolved nanocrystallography to study RNA structures and dynamics.  Recently, we developed the algorithm to recapitulate the 3D topological structure of individual RNA molecules in solution from AFM topographic particle images, which makes it possible to study RNA conformational heterogeneity under physiologically relevant solution conditions, as opposed to in restricted or confined crystal lattices or under artificially high [Mg2+].

Dr. Wang conducted his graduate work on structure determination of fragments of 23S rRNA using NMR spectroscopy and UV-melting experiments in Professor David E. Draper's lab of the Johns Hopkins University. Dr. Wang received his Ph.D. in October 1994 from the Johns Hopkins University. From 1994 to 2000 he was an NIH postdoctoral later a research fellow in Dr. Dennis Torchia's laboratory where he studied the structure, hydration dynamics of HIV-1 protease in complex with inhibitors and elucidated the 3D structure and a new function of the antitumor/anti-HIV protein MAP30. In the late 2000 he then joined the Structural Biophysics Laboratory of NCI. Using high field NMR spectroscopy and other biophysical and biochemical methods, his group studies the functional structural biology of RNAs and proteins.