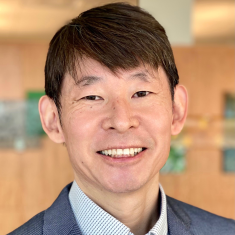 The major goal of the Machida laboratory is to understand how cells repair damaged DNA. DNA damage is the major source of mutations and genomic instability, which are the hallmarks of cancer. DNA replication is particularly vulnerable to DNA damage as DNA lesions could block progression of DNA polymerases. Stalled DNA replication needs to be resolved promptly because prolonged fork stalling could lead to under-replication and mis-segregation of the genome.

We are particularly interested in DNA-protein crosslinks (DPCs), a bulky DNA damage in which proteins are covalently crosslinked to genomic DNA. DPCs can be caused by metabolites (e.g., formaldehyde) or through abortive enzyme reactions of topoisomerases, which lead to covalent attachment of the enzymes to DNA ends. On the other hand, the toxic effects of DPCs are also exploited in some chemotherapeutic drugs such as topoisomerase inhibitors. Thus, our current research focuses on: (1) studying the roles of DPC repair mechanisms in preventing genomic instability and tumorigenesis and (2) evaluating the effect of DPC repair inhibition on DPC-inducing chemotherapies.

Research in the Machida lab focuses on how cells resolve replication conflicts with DPCs to prevent genomic instability and tumorigenesis. Our group is one of the laboratories that contributed to the discovery of SPRTN (Machida et al., 2012), a nuclear metalloprotease that is important for repairing DPCs at DNA replication forks. Mutations in the SPRTN gene cause Ruijs-Aalfs Syndrome, a rare genetic disease characterized by genomic instability, progeria, and early onset of hepatocellular carcinoma. We made a unique contribution to the understandings of SPRTN and DPC repair by generating a mouse model with reduced expression of the Sprtn gene (Maskey et al., 2014). These mice not only recapitulated the phenotypes of Ruijs-Aalfs Syndrome but also exhibited accumulation of DPCs in the liver, where tumors were formed later (Maskey et al., 2017). Our findings demonstrate that spontaneous DPCs are produced frequently yet removed efficiently by a mechanism involving SPRTN, and such a mechanism is important to prevent genomic instability and tumorigenesis.

Our goal is to develop strategies to sensitize tumors to chemotherapeutic drugs and identify types of tumors that are susceptible to DPC-inducing or protein-trapping drugs. Trapping proteins on genomic DNA is a frequently used strategy in chemotherapies to destroy cancer cells. Topoisomerase I (TOP1) inhibitors, for example, kill cancer cells by covalently trapping TOP1 on DNA in a reaction intermediate. Moreover, poly(ADP-Ribose) polymerase (PARP) inhibitors (PARPis) trap PARP proteins on genomic DNA, albeit non-covalently. Our study showed that SPRTN-deficient cells are hypersensitive to the TOP1 inhibitor camptothecin (CPT) (Maskey et al., 2017), suggesting that inhibition of DPC repair mechanisms could enhance toxicity of DPC-inducing chemotherapeutic drugs. More recently, we also reported that knockout of FAM111A, a serine protease that localizes to replication forks, causes hypersensitivity to CPT and PARPis (Kojima et al., 2020). These studies showed that FAM111A promotes DNA replication at TOP1-DPCs and PARP-DNA complexes in a manner dependent on its protease activity and the interaction with PCNA, a clamp for DNA polymerases. We propose a model that FAM111A promotes DNA replication at protein obstacles, thereby influencing sensitivities to these drugs.

Dr. Machida obtained his Ph.D. degree in biotechnology from Nagoya University in Japan. He subsequently received his postdoctoral training in the laboratory of Dr. Anindya Dutta at Brigham and Women’s Hospital in Boston and the University of Virginia, where he studied molecular mechanisms of DNA replication and repair. Dr. Machida started his independent research career as assistant professor at the Mayo Clinic in 2008 and was promoted to associate professor in 2018. His research on novel DNA repair enzymes, SPRTN and FAM111A, had been supported by funding from NIH and other research foundations. In 2022, Dr. Machida joined the Developmental Therapeutics Branch as a Senior Investigator. His current research focuses on the proteases involved in DNA repair and their roles in the maintenance of genomic stability.