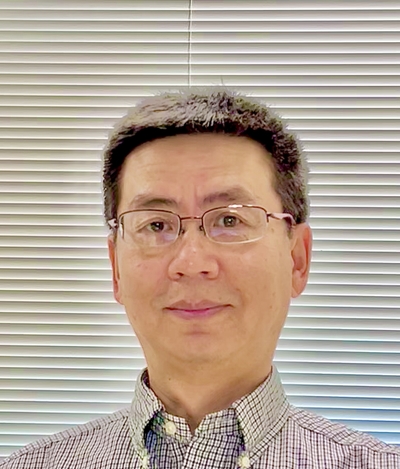 Our long-term goal is to understand how DNA molecules in eukaryotic cells are folded to form various structures of chromatin, which is critical for the regulation of gene expression and cell function. The DNA molecules in eukaryotic cells are extremely long polymers that must be folded to more compact forms to fit within the small cell nucleus. Several small positively charged proteins called histones help DNA fold. Core histones (H2A, H2B, H3, and H4) and DNA first form nucleosomes, the repeating structural unit of chromatin. Each nucleosome core particle contains two copies of each of the four core histones around which ~146 base pairs of DNA are wrapped. In higher-order eukaryotes, the repeating unit of chromatin is the chromatosome, which consists of one linker histone (H1) bound to the linker DNA region of the nucleosome. Linker histones are responsible for the formation of more compact higher-order structures of chromatin and there are 11 linker histone variants in humans. In addition, the dynamic folding/unfolding processes of chromatin are regulated by many non-histone proteins including histone chaperones, chromatin remodeling enzymes, histone modification enzymes, pioneer transcription factors, and kinetochore proteins, etc. They play important roles in the regulation of cell function. We use multiple biophysical techniques (NMR, X-ray crystallography, Cryo-EM, ITC, and FRET, etc.) to investigate the structures and dynamics of (i) the recognition between histones and their chaperones, (ii) the interactions between nucleosomes and nucleosome-binding proteins, (iii) chromatosomes, and (iv) nucleosome arrays.

Dr. Yawen Bai received his Ph.D. in biophysics from the University of Pennsylvania Medical School in 1994. He did his Ph.D. work in Walter Englander's lab, where he developed the native-state hydrogen exchange method to detect partially unfolded states of proteins. He completed his postdoctoral training in Peter Wright's lab at the Scripps Research Institute, where he studied protein folding using multi-dimensional NMR methods. He joined the Laboratory of Biochemistry of NCI as an independent investigator in 1997.