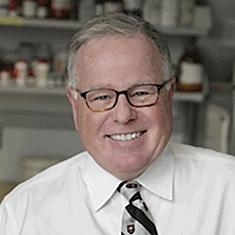 The Molecular Pharmacology Section (MPS) has, as its primary focus, understanding the pharmacology of new anticancer agents for prostate cancer and other metastatic disease processes, as well as elucidating the cross-regulation of pathways within the tumor microenvironment.

Understanding the androgen regulatory pathways in prostate cancer. The genetics and molecular mechanisms that drive prostate cancer progression and its transition to the castrate-resistant state remain of paramount importance to circumvent resistance, determine optimal sequencing of agents, and identify predictive biomarkers of benefit. My laboratory is interested in understanding the role of androgen regulation and transport in prostate cancer and the associations between important androgen regulatory gene polymorphisms and prostate cancer risk in an effort to ultimately discover and characterize novel druggable targets and pathways, develop drugs that interact with these pathways, and improve treatment paradigms using molecular biology and genomics knowledge.

Developing new treatments for castration-resistant prostate cancer (CRPC). We are interested in developing novel targeted therapies based on understanding the biology and genetic mechanisms that drive prostate cancer development and progression to metastatic CRPC (mCRPC). A major component of this effort is on the biology and assessment of the utility of the androgen transporter, OATP1B3, as a diagnostic marker and as a drug target. We are currently focused on understanding the role of OATP1B3 in steroid hormone transport and its molecular characterization in prostate cancer for future drug discovery efforts. We are also developing targeted therapies against CRPC with a particular emphasis on the rational design and development of small molecule inhibitors and inhibitors of protein-protein interactions that have therapeutic potential for cancer therapy. To this end, we have embarked upon a new drug screening project to identify novel drug targets and develop rationale combination therapies using next-generation sequencing and a matrix combination screening platform that is designed to identify novel drug targets/pathways for CRPC. Using in vitro and ex vivo models optimized in our laboratory, we have identified several potential agents/combinations and are currently proceeding in preclinical testing that involve extensive dose-finding studies, mouse efficacy studies using prostate cancer xenografts as well as in mouse models of prostate cancer metastases with the goal of moving these agents to the clinic.

Development of thalidomide analogs and immunomodulatory drugs (IMiDs). The antiangiogenic properties of thalidomide reported by D'Amato and colleagues prompted its clinical evaluation in various solid tumors and blood cancers. Previously, we showed that one of the products of cytochrome P450 2C19 isozyme biotransformation of thalidomide, 5'-OH-thalidomide, is responsible for the drug's antiangiogenic activity. Based on the chemical structure of this metabolite, we synthesized over 315 novel analogs of thalidomide and screened them for inhibition of inflammation and angiogenesis using various in vitro, ex vivo, and in vivo drug development models (e.g., rat aorta ring model, human saphenous vein mode, migration and tube formation assays, zebrafish and chicken embroyo models). We identified the most potent of these agents and have patented them. We continue to develop these compounds, which appear to have minimal side effects in initial preclinical toxicology studies and may have improved pharmacology over the existing FDA-approved thalidomide analogs called IMiDs (or cereblon modulators). We have optimized for both antiangiogenic, anti-inflammatory, and anticancer properties of these thalidomide derivatives and evaluated the next-generation class of compounds with activity in IMiD-resistant multiple myeloma cell lines. This work in anti-cancer drug development serves to advance the discovery of new treatment paradigms that focus on immunomodulation for advanced, metastatic disease.

Assessment of the pharmacology of anticancer agents. Pharmacology is a discipline that resides at the important interface of understanding the biology of disease, molecular mechanisms of drug action, and the development of clinically effective treatment approaches. We apply modern molecular and genetic techniques (e.g., omics, CRISPR) to understand the underlying biological pathways and the pharmacology of novel anticancer agents. We integrate pharmacogenomics (molecular basis of individual variation in response to drugs) in our drug development efforts to identify novel targets and clinically actionable therapeutics as well as elucidate interindividual differences in drug response and resistance. Identifying key genetic determinants and biomarkers that predict response or resistance to specific treatments serves as an important step towards the era of precision medicine.

Dr. Figg received a BS in Pharmacy from Samford University and a doctoral of pharmacy degree from Auburn University.  He completed his internship at the University of Alabama at Birmingham Hospital and a fellowship in Drug Development at the University of North Carolina at Chapel Hill.  He also received an MBA degree from a combined program at Columbia University and the London Business School. He holds honorary degrees from Georgetown College and the Philadelphia College of Osteopathic Medicine. Dr. Figg joined the National Cancer Institute, National Institutes of Health in 1992. The following year he became head of the Molecular Pharmacology Section and the Clinical Pharmacology Program. He is also co-director of the Office of Translational Resources and Associate Director of the NCI’s Center for Cancer Research. He has over 800 peer-reviewed publications and his work has been cited in the scientific literature over 51,000. As a measure of scientific impact, Dr. Figg has a H-index of 121 and an i10-index of 586. He is an adjunct professor at Columbia University’s College of Physicians and Surgeons (Division of Hematology and Oncology) and serves as adjunct faculty at several schools of pharmacy throughout the country. Dr. Figg is also a retired Captain in the Commissioned Corps of the U.S. Public Health Service.