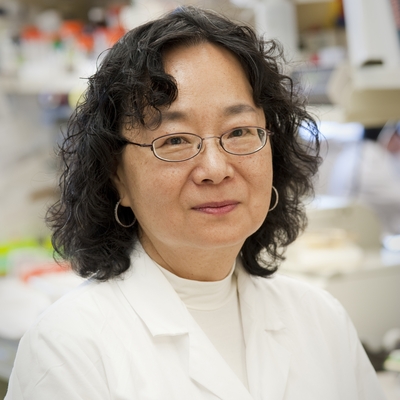 We study how retroviruses transfer genetic information to the next generation. HIV-1 packages two copies of full-length viral RNA into a particle. Upon infecting a new host cell, virion RNA is used as the template to generate viral DNA, which integrates into the host chromosome to form a provirus. We study several aspects of the viral replication cycles that affect the transfer of viral genetic information, including the transport and trafficking of the viral RNA, packaging of the viral RNA genome, virus assembly, and reverse transcription. We use molecular biology and biochemical approaches in combination with state-of-the-art microscopy techniques to study these topics.

Retroviral RNA packaging and virus assembly. In order to generate infectious viruses, HIV-1 must encapsidate full-length unspliced RNAs into its particle. To study HIV-1 RNA packaging, we have developed a novel assay to directly visualize viral RNA in the particles at single-RNA-molecule sensitivity. This assay reveals that most HIV-1 particles contain two copies of full-length viral RNA. Although it is known that retroviral RNAs that are packaged into particles are dimeric, standard biochemical assays cannot determine the number of RNA molecules in one particle; our results provide evidence to support the long-standing assumption that two RNA molecules (one dimer) are packaged into a particle. To better understand the mechanisms of RNA packaging, we have performed genetic, biochemical, and imaging analyses to show that HIV-1 RNA uses base-pairing of the dimerization initiation signal sequence to select its copackaged RNA partner, and this process occurs in the producer cell prior to RNA packaging into particles. We study the mechanisms that HIV-1 uses to regulate which and how many RNAs are packaged. Additionally, we study the interactions between viral Gag protein and full-length RNA that lead to the encapsidation of the viral genome during virus assembly.

Retroviral RNA trafficking. Full-length HIV-1 RNA needs to traffic to specific subcellular locations to carry out its functions, including serving as a template for Gag/Gag-Pol translation and as a genome in the newly assembled virion. The functions of the viral RNA and the translated proteins can be affected when RNA is targeted to incorrect locations in the cells. Using our newly developed imaging tools and live-cell imaging techniques, we study HIV-1 RNA transport and its relation to the function of viral RNAs. These experiments will provide an understanding of aspects of HIV-1 replication that we currently know very little about and will allow us to better understand how HIV-1 uses the cellular machinery to traffic its macromolecules.

Reverse transcription and recombination. Recombination plays an important role in HIV replication and evolution. For example, many of the primary isolates of HIV are recombinants, and recombination can assort mutations to generate variants that escape host immune responses or are resistant to multidrug treatment protocols. Recombination of HIV-1 occurs during reverse transcription, using information in the two RNAs to produce a hybrid DNA. Therefore, phenotypically different recombinants are generated from viruses containing two copies of different RNAs. Only cells that are doubly infected can produce virions containing two different RNAs. To better understand interactions in HIV-1 populations, we study the dynamics of double infection, the frequency of recombination, and the mechanism of reverse transcription.

Dr. Wei-Shau Hu received her Ph.D. in Genetics from the University of California, Davis, in 1987. She studied the mechanisms of DNA recombination that lead to human α-thalassemia in Dr. James Shen's laboratory. Under Dr. Howard Temin's guidance, she studied the mechanisms of retroviral recombination as a postdoctoral fellow at the University of Wisconsin. In 1991, Dr. Hu joined the faculty of West Virginia University as an Assistant Professor in the Department of Microbiology and Immunobiology and the Mary Babb Randolph Cancer Center. She was promoted to Associate Professor with tenure in 1998. In 1999, she joined the National Cancer Institute (NCI) as Senior Investigator and Head of the Viral Recombination Section in the HIV Drug Resistance Program (HIV DRP, renamed the HIV Dynamics and Replication Program in 2015). Dr. Hu was an organizer of the 2009 Cold Spring Harbor Laboratory Retroviruses Meeting. She served as the Frederick representative of Women Science Advisors for the NCI from 2012 to 2016 and as a member of the AIDS Molecular and Cellular Biology Study Section of the National Institutes of Health extramural grant funding programs from 2010 to 2016. In 2012, she was the recipient of one of the five grants that the U.S.-Russia Joint Working Group on Biomedical Research Cooperation awarded to NCI intramural investigators for their highly meritorious research applications; Dr. Hu's application was focused on understanding the impact of HIV-1 recombination and cell-to-cell transmission on vaccine development and chemoprevention strategy. She was coauthor of a study published in Proceedings of the National Academy of Sciences USA (“HIV-1 uncoats in the nucleus near sites of integration,” PNAS 117: 5486-5493, 2020) that was honored with the 2020 Cozzarelli Prize in the class of Biomedical Sciences; this prize was awarded to just 6 papers chosen from nearly 4,000 published research articles in 2020, recognizing the most outstanding contributions to the scientific disciplines represented by the National Academy of Sciences. In 2021, Dr. Hu was elected as a Fellow in the American Society of Microbiology and was selected by the Center for Retrovirus Research of The Ohio State University to receive the 2021 Distinguished Research Career Award. She currently serves as a member of the HIV Interactions in Viral Evolution (HIVE) Center, NCI Promotion Review Panel, and NCI RNA Biology Initiative. Dr. Hu was appointed as HIV DRP Deputy Director of Basic Research in 2021.