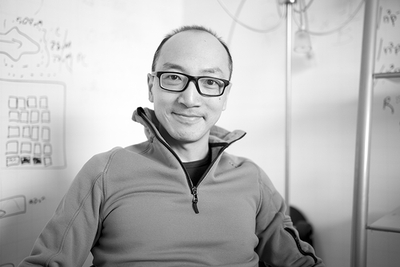 The long-term goal of our research is to study the mammalian retina as a model for the central nervous system (CNS) -- to understand how it functions in physiological conditions, how it is formed, how it breaks down in pathological conditions, and how it can be repaired. We have focused on two research themes: 1) Photoreceptor structure, synapse, circuits, and development, 2) Hibernation and metabolic adaptations in the retina and beyond. As the first neuron of the visual system, photoreceptors are vital for photoreception and transmission of visual signals. We are particularly interested in cone photoreceptors, as they mediate our daylight vision with high resolution color information. Diseases affecting cone photoreceptors compromise visual functions in the central macular area of the human retina and are thus most detrimental to our vision. However, because cones are much less abundant compared to rods in most mammals, they are less well studied. We have used the ground squirrel (GS) as a model system to study cone vision, taking advantage of their unique cone-dominant retina. In particular, we have focused on short-wavelength sensitive cones (S-cones), which are not only essential for color vision, but are also an important origin of signals for biological rhythm, mood and cognitive functions, and the growth of the eye during development. We are studying critical cone synaptic structures – synaptic ribbons, the synaptic connections of S-cones, and the development of S-cones with regard to their specific connections. These works will provide knowledge of normal retinal development and function, which can also be extended to the rest of CNS. In addition, such knowledge will benefit the development of optimal therapeutic strategies for regeneration and repair in cases of retinal degenerative disease. Many neurodegenerative diseases, including retinal diseases, are rooted in metabolic stress in neurons and/or glial cells. Using the same GS model, we aim to learn from this hibernating mammal, which possesses an amazing capability to adapt to the extreme metabolic conditions during hibernation. By exploring the mechanisms of such adaptation, we hope to discover novel therapeutic tactics for neurodegenerative diseases.

Dr. Li received his medical degree in 1997 from Zhejiang University School of Medicine in China and his Ph.D. in Neuroscience in 2003 from the University of Texas at Houston where he studied the organization of reciprocal feedback synapse at the axon terminal of the retinal bipolar cell in Dr. Stephen Massey's laboratory. From 2003 to 2007, as a postdoctoral fellow, he worked with Dr. Steven DeVries at Northwestern University where he investigated synaptic connections between photoreceptors and bipolar neurons in a mammalian retina. Dr. Li joined NEI as the principal investigator of the Unit on Retinal Neurophysiology in 2007. His unit uses a variety of physiological and anatomical techniques to explore retinal synapses and circuits and their functions in vision.