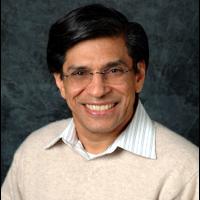 Project 1. Develop Novel Therapeutics by Targeting Vif-APOBEC3 Interactions. Inhibition of Deltavif HIV-1 by APOBEC3G (A3G) and APOBEC3F (A3F) requires their expression in the virus producer cells and incorporation into virions. A3G and A3F deaminate cytidines in minus-strand DNA, causing G-to-A hypermutation and inhibiting viral DNA synthesis. HIV-1 Vif (Vif1) overcomes these host defenses by targeting A3G and A3F for proteasomal degradation. The Vif1-A3G and Vif1-A3F interactions provide two potential targets for development of pharmacological agents that interfere with Vif1-mediated degradation of A3G and A3F (Xu et al., PNAS, 2004; Russell et al., J. Virol., 2007; Smith & Pathak, J. Virol. 2010). To identify such small-molecule inhibitors, we have developed cell-based high-throughput assays and we are collaborating with the National Center for Advancing Translational Sciences (NCATS) to identify molecules that specifically inhibit the Vif1-A3G and Vif1-A3F interactions. Vif1 binds to several host proteasomal proteins; we are collaborating with the NCATS to carry out a small-interfering-RNA (siRNA) screen to identify host factors that may be involved in Vif1-mediated degradation of A3G and A3F. Gene therapy for HIV-1 infected individuals has the potential to provide a one-time treatment that will reduce viral load, lessen the use of toxic antiviral drugs, and preserve or improve immune function. Our goal is to test the hypothesis that expression of Vif1-resistant A3G and A3F proteins in HIV-1 target cells will reduce viral loads and control HIV-1 replication. We are developing novel retroviral vectors that can efficiently deliver the Vif1-resistant A3G and A3F to hematopoietic stem cells, and will use a humanized mouse model system to determine the effect of the gene therapy on HIV-1 viral load and preservation of CD4+ T cells. These studies will provide the proof of concept that gene therapy with Vif1-resistant A3G and A3F can provide an effective treatment for HIV-1 infection.

Project 2. Elucidate the Structure and Function of APOBEC3 Proteins. We have shown that A3G and A3F both inhibit viral DNA integration, but through distinctly different mechanisms (Mbisa et al., J. Virol., 2007; Mbisa et al., J. Virol., 2010). We also developed a bimolecular fluorescence complementation assay to visualize A3G and A3F molecular interactions in living cells and observed that A3G and A3F multimerization, A3G-Gag interactions, and A3G virion incorporation require RNA binding (Friew et al., Retrovirology, 2009). We recently compared the antiviral activity of A3G and A3F in primary CD4+ T cells and macrophages, the natural target cells of infection, and found that while both can inhibit HIV-1 replication A3G is a more potent inhibitor of HIV-1 than A3F (Chaipan et al., J. Virol., 2013). We recently showed for the first time that A3G and A3F remain associated with HIV-1 preintegration complexes (PICs) in the nuclei of infected cells (Burdick et al., PNAS, 2013). Using A3F-labeling as a novel tool to visualize PICs, we determined that 1) reverse transcription is not required for nuclear import of PICs, indicating that a viral core uncoating event associated with reverse transcription, and the central DNA flap that forms during reverse transcription, are not required for nuclear import; 2) viral core stability mutations dramatically reduce association of PICs with the nuclear envelope as well as diminish their nuclear import; and 3) most nuclear PICs remain close to the nuclear envelope and are not distributed throughout the nuclei. We are also analyzing HIV-2 Vif (Vif2) interactions with A3G and A3F and find that these structural determinants are different from the Vif1-A3G and Vif1-A3F interaction determinants. Hypermutation by A3G and A3F can potentially contribute to viral genetic variation and evolution. We have observed that replication of a Vif1 mutant defective in blocking A3G exhibits strong purifying selection at multiple steps in viral replication (Russell et al., Retrovirology, 2009). We are analyzing replication of Vif1 mutants defective in blocking A3G or A3F by ultra-deep pyrosequencing to gain a comprehensive view of the impact of APOBEC3 proteins on HIV-1 genetic diversity, selection, and evolution.

Project 3. Explore Mechanisms of Antiviral Drug Resistance, Host Factors, and Retroviral Replication. Most studies of clinical drug resistance to nucleoside and nonnucleoside reverse transcriptase (RT) inhibitors (NRTIs and NNRTIs, respectively) analyze the first 300 amino acids of RT and do not include the C-terminal connection subdomain (CN) or the RNase H domain (RH). We observed that several mutations in the CN and RH reduce RNase H activity, thereby affecting the balance between RNA degradation and nucleotide excision and enhancing NRTI resistance ( Nikolenko et al., PNAS, 2005; Nikolenko et al., PNAS, 2007; Delviks-Frankenberry et al., PNAS, 2008). Our studies have demonstrated that mutations in the CN and the RH can also increase resistance to NNRTIs, and suggest a parallel mechanism by which resistance to both classes of RT inhibitors can be increased (Nikolenko et al., J. Virol., 2010). It has been observed that CN mutations are present in drug-naive patients, and we are exploring the mechanisms by which CN mutations may be selected prior to initiation of antiviral therapy.

While investigating the functional relevance of A3G localization to P bodies, we found that P body-associated protein Mov10 potently inhibits HIV-1 replication by reducing virus production and inhibiting reverse transcription (Burdick et al., J. Virol., 2010). We are elucidating the mechanism by which Mov10 inhibits HIV-1 replication, and found that association of Mov10 and A3G with cytoplasmic mRNA processing bodies is not required for their virion incorporation and antiviral activity (Izumi et al., J. Virol., 2013).

Xenotropic murine leukemia virus-related virus (XMRV), a gammaretrovirus, was reportedly found in prostate cancer (PC) and chronic fatigue syndrome (CFS) patients at high frequencies. However, we found that XMRV replication is severely restricted by human APOBEC3 proteins (Paprotka et al., J. Virol., 2010) and XMRV and spread are severely restricted in human peripheral blood mononuclear cells (PBMCs) (Chaipan et al., J. Virol., 2011), raising doubts about robust XMRV replication in these cells as previously reported. To gain insights into the origin of XMRV, we analyzed PC xenografts that were passaged in nude mice and used to develop a cell line that produces XMRV that is nearly identical to the viruses isolated from patients. The results showed that XMRV is most likely a recombinant between two murine endogenous proviruses that we named PreXMRV-1 and PreXMRV-2 (Paprotka et al., Science, 2011). We concluded that the association between XMRV and human disease is due to contamination of human samples with virus originating from this unique recombination event.

Dr. Vinay K. Pathak received his B.A. in Biology from the University of California, Los Angeles, in 1979.  He obtained his M.S. in Comparative Pathology in 1983 from the University of California, Davis, for characterization of mouse mammary tumor virus proviral integration sites near the int1 and int2 loci in mammary tumors and hyperplastic tissues in Dr. Robert Cardiff's laboratory.  He received his Ph.D. for work on characterization of the eukaryotic protein synthesis initiation factors eIF-2α and eIF-2β in Dr. John W.B. Hershey's laboratory at the University of California, Davis, in 1988.  He was a postdoctoral fellow under the guidance of Dr. Howard Temin from 1988 to 1991, where he determined the in vivo forward mutation rate of spleen necrosis virus and characterized the nature of mutations that arise during retroviral replication.  These studies were the first to report G-to-A hypermutation in a retrovirus, now known to be the result of cytidine deamination by host restriction APOBEC3 proteins.  In 1991, Dr. Pathak became an Assistant Professor in the Department of Biochemistry and the Mary Babb Randolph Cancer Center at West Virginia University.  He was promoted to Associate Professor with tenure in 1998.  He joined the National Cancer Institute in 1999 as Senior Investigator and Head of the Viral Mutation Section in the HIV Dynamics and Replication Program (renamed as the HIV Dynamics and Replication Program in 2015).  Dr. Pathak was appointed as Guest Editor for the "HIV Drug Resistance" special issue of Viruses, published in 2010.  In 2012, he received the NIH Asian and Pacific Islander American Organization Award for outstanding accomplishments in biomedical research.  He served as Co-Chair (2013-2014) and Chair (2015) of the Annual Norman P. Salzman Memorial Symposium in Virology, NIH.  In 2017, he served as Co-Organizer of the Cold Spring Harbor Laboratory Retroviruses Meeting.  He currently serves as a member of the NCI RNA Biology Initiative.

This page was last updated on September 11th, 2019