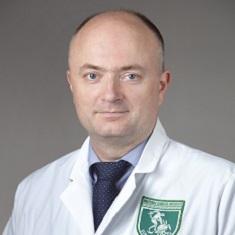 Our laboratory aims to address the unmet medical need for more effective treatments in pancreas cancer patients. The overarching goal of the program is the development of novel therapeutics and therapeutic strategies to improve the life of pancreas cancer patients. Discoveries in the laboratory are tested in focused safety and proof-of-concept clinical trials, and observations made in the clinic are fed back to the laboratory to generate improved hypotheses and refine further preclinical research. Preclinical testing currently ranges from early structure-activity, in vitro, cell-based and in vivo evaluations, to PK, toxicokinetic, and IND enabling studies. Clinical protocols currently include a phase II-genotype directed small molecule approach, and a phase IB/II study of a dual TGFβ-PD-L1 inhibitor in combination with gemcitabine, and planned a phase I clinical trial of the novel drug candidate metarrestin. Many of these research efforts are conducted within a network of close collaborations which include scientists at NCATS, FNLCR, Northwestern, Tuskegee University, and small pharma, whose expertise and contributions are essential in further productive drug discovery and its clinical translation.

I. Preclinical and clinical development of metarrestin

Metarrestin is a novel small molecular inhibitor with selective activity against the metastatic phenotype of cancer cells.  Metarrestin targets a small nuclear structure, the peri-nucleolar compartment (PNC), and has impressive activity in pancreatic cancer metastasis models. Extensive rodent pharmacology and PK studies have shown excellent tissue penetration of the drug with plasma : tumor AUC ratios exceeding 1 : 10 and intratumoral drug levels close to 100µM at non-toxic dose levels. Prediction via allometric scaling in 4 species estimated an acceptable therapeutic window I humans so far and development of a capsule formulation has been completed. Clinical translation of metarrestin is supported by NCATS’ BrIDGs (Bridging the Interventional Development Gap) program [‘Metarrestin for the Treatment of Pancreatic Cancer] with an anticipated IND filing in Q4 2018 and a first-in-human clinical study thereafter.

Additional preclinical development currently focuses on the immunomodulatory function of metarrestin through its interference with protein translation and the merit of combinational immunotherapy approaches, other combination studies derived from mechanism of action studies, and on biomarker development.

RP-182 is a synthetic host defense peptide with impressive anti-cancer activity in combination with gemcitabine in our transgenic murine pancreas cancer models. Our laboratory has shown that RP-182 binds CD206 and targets CD206 positive M2 tumor-associated macrophages. Depletion of M2 macrophages improves intratumoral immunity. In order to bring the approach of depleting M2 tumor associated macrophages via CD206 engagement with such peptides to the clinic, we have developed a quantitative carboxylic acid affinity purification based mass spectrometry platform for preclinical PK and PK/PD in vivo dose response studies. In addition, we are working on a number of avenues to improve exposure of the agent and enhance its efficacy.

III. Clinical development of stromal reprogramming via TGFβ inhibition in combination with gemcitabine

Previous work of ours has shown that stromal modulation via low-dose TGFβ inhibition in combination with gemcitabine yields anti-tumor responses and extends survival in genetically engineered mice with pancreas cancer. Rather than working through increased genotoxicity due to improved drug delivery of gemcitabine, the two agents cooperate, among other mechanisms, by reprogramming T regulatory cells from an effector/memory towards a naïve T reg phenotype. One of the resistance mechanisms to this approach is the upregulation of PD-L1 expression on cancer cells, and the addition of an anti-PD-L1 immune checkpoint inhibitor further improves survival in preclinical models. These findings formed the rationale for the clinical protocol evaluating tolerability and efficacy a  the dual anti-TGFβ (‘TGFβ trap’) - anti-PD-L1 inhibitor in combination with gemcitabine within a phase IB/II study in patients with advanced pancreas (NCI 18-C-0061).

Results from correlative studies on pre- and on-treatment biopsies obtained on this study will inform future preclinical development of RP-182 with regard to the most promising combination immunotherapy and RP-182. The development of immunotherapy ‘trimers’, immunotherapeutic moieties attached to a scaffold targeting checkpoint, cytokines, or components of the innate system including RP-182, are planned to be tested in genetically engineered mice, and if efficacious, to be tested in early clinical protocols.

Our discovery that pancreatic tumors with KRAS G12R mutations (present in 15 – 18% of pancreas cancers) show increased response to the MEK inhibitor selumetinib in preclinical models is currently tested in the phase II study‘A Phase II Study of Selumetinib (AZD6244) for the Treatment of Advanced Pancreas Cancer harboring KRAS G12R Mutations’ (NCI-17-C-0144). Pre-treatment biopsies will aim to identify predictors of response.

My laboratory has been privileged to be supported with philanthropic donations over the last years. These funds are used for a 1 – 2 years cancer research fellowship focused on drug development and translation of basic science findings into the clinic. The goal of the fellowship is to train and support a young scientist in the field of drug development in solid organ cancers to contribute to the training and education of the next generation of scientist. Any candidate with a B.S., M.S., or graduate student level in biomedical research fields is eligible to apply, candidates should not have more than 2 years of post-graduate experience.

Dr. Rudloff is an investigator and surgical oncologist at the Surgery Branch, National Cancer Institute, National Institutes of Health, in Bethesda, Maryland. Dr. Rudloff completed his M.D. at the University of Heidelberg, Germany. For his doctoral thesis at the German Cancer Research Institute, Heidelberg, he worked on gene regulation of rRNA transcription. He graduated from New York University in 2007 upon completion of his surgical residency training and pursued subspecialty training in surgical oncology by completing a 2-year surgical oncology fellowship at Memorial Sloan Kettering Center in New York City. He was appointed to the senior staff of the Surgery Branch/NCI in July 2009.