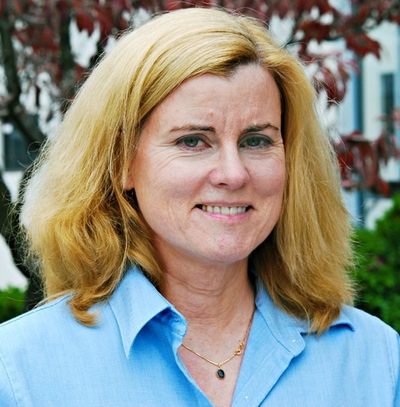 We aim to understand how mammals regulate intracellular and systemic iron metabolism. Iron-regulatory proteins 1 and 2 (IRP1 and IRP2) regulate the expression of numerous proteins of iron metabolism. In iron-depleted cells, the proteins bind to RNA stem-loops in transcripts known as iron-responsive elements (IRE). IRP binding stabilizes the mRNA that encodes the transferrin receptor and represses the translation of transcripts that contain IREs near the 5′ end of ferritin H and L chains. IRP1 is an iron-sulfur protein that functions as an aconitase in iron-replete cells. IRP2 is homologous to IRP1 but undergoes iron-dependent degradation in iron-replete cells. In mouse models, loss of IRP2 results in mild anemia, erythropoietic protoporphyria, and adult-onset neurodegeneration—all likely the result of functional iron deficiency. Biochemically and with expression arrays, we study the mechanisms that lead to anemia and neurodegeneration in IRP2−/− mice and are using our mouse model of neurodegeneration to identify compounds that can prevent neurodegeneration; we found that the antioxidant Tempol works by activating the latent IRE-binding activity of IRP1. We are evaluating the possibility that loss of IRP2 in humans may cause mild refractory anemia and adult-onset neurodegeneration, which is characterized by limb weakness and might be diagnosed as amyotrophic lateral sclerosis in humans.

We study mammalian iron sulfur cluster biogenesis, which involves a complex interplay of biogenesis factors and factors that specify recipient proteins. Through our discovery of a motif common in iron sulfur proteins, we are pursuing the hypothesis that hundreds of mammalian proteins are iron sulfur proteins that are presently unrecognized as such because iron sulfur cofactors are readily degraded during purification and laboratory studies. Discovery of iron sulfur proteins in many crucial pathways, from respiration to DNA and RNA metabolism, to numerous metabolic pathways, may substantially add to our understanding of cellular homeostasis and function. Our knowledge has enabled us to develop a therapy for COVID 19, based on discovering that the SARs-CoV-2 replicase requires iron sulfur cofactors for function.

Dr. Tracey Rouault completed her undergraduate studies at Yale, and received her M.D. from Duke, after which she completed training in internal medicine and rheumatology at Duke and became board certified in both specialties. She came to NIH as a human genetics fellow in the NICHD, and was subsequently promoted to head of the Section on Human Iron Metabolism, and then to head of the Metals Biology and Molecular Medicine Branch. She was elected to the American Association of Physicians, received a distinguished alumnus award from Duke Medical Center, and has twice received the NIH Director's Award for outstanding accomplishments in iron metabolism. Dr. Rouault’s laboratory has a long-standing interest in regulation of mammalian iron metabolism. Early work involved cloning and characterization of iron regulatory proteins 1 and 2 (IRPs), and elucidation of how these proteins sense cytosolic iron levels and regulate expression of iron metabolism genes. IRPs bind to RNA stem-loops known as iron-responsive elements (IREs) in transcripts that encode iron metabolism genes, including ferritin, transferrin receptor 1, ferroportin, HIF2 alpha, and several other transcripts. IRP1 acquires an iron-sulfur cluster in iron-replete cells that prevents it from binding to IREs, and enables it to function as a cytosolic aconite. The discovery of the iron-sulfur cluster in IRP1 led to extensive studies of mechanisms of iron-sulfur cluster biogenesis, which resulted in characterization of a mammalian cysteine desulfurase, NFS1, a primary scaffold known as ISCU, a secondary scaffold known as NFU1, an NFS1 binding partner, ISD11, and a cochaperone known as HSC20. Defective iron sulfur biogenesis causes several diseases, including Friedreich ataxia, and four new diseases that our group helped to discover and characterize, including ISCU myopathy, sideroblastic anemia from GLRX5 deficiency, and lactic acidosis caused by mutations in NFU1 and BOLA3. The lab is actively engaged in trying to treat diseases using antisense strategies. The Rouault lab discovered that animals that lacked IRP2 developed adult-onset neurodegeneration with prominent motor neuron disease, and studies demonstrated that functional iron deficiency adversely affected mitochondrial function in neurons. Recently, our group collaborated to identify two human patients with IRP2 deficiency related neurodegenerative disease. The lab also discovered several interesting phenotypes in mice that lack IRP1 that have relevance to human disease. The group is studying metabolic remodeling that occurs in kidney cancers caused by mutations in fumarate hydratase and succinate dehydrogenase, subunit B. The metabolic remodeling extends to iron metabolism and iron sulfur protein activities. Our group discovered that heme oxygenase 1 deficiency causes iron redistribution because lack of heme oxygenase 1 leads to death of erythrophagocytosing macrophages, and the lab is attempting to prevent disease in heme oxygenase deficient mice by performing bone marrow transplants and infusing macrophages exogenously to supply the mice with normal macrophages. We discovered that the Q248H mutation of ferroportin likely protects against malaria because it reduces iron contents of red cells and deprives malaria parasites of important nutrition. This mutation is prevalent amongst African Americans, and it may explain some health disparities to which African Americans are predisposed. Much of the basic laboratory work performed in the lab has translational implications for improving human health.

This page was last updated on Wednesday, November 16, 2022