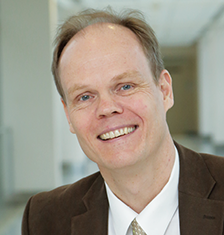 Dr. Greten has been studying immunotherapy of GI cancers for more than 20 years. After a post-doctoral fellowship at Johns Hopkins, where he developed MHC-IgG fusion proteins to detect tumor-specific T cells in patients with cancer and studied the effect of tumor cell death on tumor specific immune responses, he decided to focus on primary liver cancer and the specific tumor microenvironment in the liver.

Dr. Greten has been a pioneer in studying tumor-specific immune responses in patients with hepatocellular carcinoma (HCC). Very early on he made the unexpected observation that patients with HCC mount spontaneous tumor-specific immune responses, which led to the question of why tumors would progress if tumor-specific T cells were present. He described in his early studies an accumulation of suppressive regulatory T cells and was one of the pioneers to study another cell type with immune suppressor function, CD14+ HLA-DRlo myeloid derived suppressor cells. Based on these findings, he conducted small proof of concept clinical trials targeting regulatory T cells and a peptide vaccine approach to enhance anti-tumor immunity in HCC. Based on the clinical observation that non-alcoholic fatty liver disease (NAFLD) is a risk factor to develop HCC; Dr. Greten developed a mouse model, which helped him, and his group explain the cellular and metabolic mechanism ultimately leading to impaired immune responses in NAFLD. This work led to multiple high impact publications in Nature, Gastroenterology, Journal of Hepatology and other scientific journals. Based on the observation that different diets can change immune responses in the liver through immediate interactions with fatty acids accumulating in the liver in non-alcoholic fatty liver disease, Dr. Greten decided to extend those studies and explore whether the gut microbiome may also affect immune responses in the liver because of the specific anatomical location of the liver with the immediate connection to the gut through the portal vein. His group demonstrated that commensal bacteria control bile acid metabolism, which indeed control NKT cells in the liver (Science, 2018). His current research portfolio includes basic research studies on the gut microbiome, NAFLD and how they affect anti-tumor immunity in the liver. His research combines studies on human samples, complex murine models as well as early investigator-initiated trials.

Dr. Greten has been highly successful both in his clinical and laboratory research with publications in leading journals including Nature, Science, Cancer Cell, Cancer Discovery etc. He is a pioneer for the field of immunotherapy of liver cancers, which now have become standard of care. Dr. Greten has mentored many students and fellows at different levels of their career and is internationally recognized as a leader in the field of immunotherapy of liver cancers.

Tim F. Greten, M.D., received his medical training at the Christian Albrechts University in Kiel, Germany. He did his internship in Munich followed by a 3-year postdoctoral fellowship at the Johns Hopkins University (Baltimore, Maryland), where he initiated his work in the field of tumor immunology. In 1999, Dr. Greten returned to Hannover Medical School, where he finished his training in Internal Medicine (2003), Medical Oncology (2004) and Gastroenterology (2007). He held an Associate Professor position in the Department of Gastroenterology, Hepatology and Endocrinology in Hannover Medical School. In February 2010, Dr. Greten joined CCR's Medical Oncology Branch as the head of the Gastrointestinal Malignancy Section and was promoted as a tenured Senior Investigator in 2015 and Deputy Branch Chief in 2018.

Dr. Greten has published more than 200 peer-reviewed papers in different journals including Science, Nature, Cell, Cancer Cell, Cancer Discovery and New England Journal of Medicine. Dr. Greten is co-chair of the Center of Excellence in Immunology and co-director of the NCI CCR Liver Cancer Program.

This page was last updated on September 12th, 2022