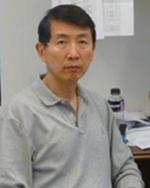 Research in this section focuses on inherited forms of retinal degeneration, clinically known as retinitis pigmentosa (RP) or Leber congenital amaurosis (LCA). Related diseases including Usher syndrome and other ciliopathies are also of major interest. Photoreceptors achieve efficient phototransduction by elaborating a modified cilium, the outer segment (OS), in which components of the phototransduction cascade are highly concentrated. Nascent proteins synthesized in the inner segment are continuously transported through the connecting cilium (CC) to the outer segment against a steep concentration gradient. In frog photoreceptor, a periciliary ridge complex (PRC) is thought to be where rhodopsin-bearing vesicles dock before moving on to the CC and OS. Though not apparent in mammals, a functional equivalent of PRC exists and is defined by an Ush2 protein network. In non-photoreceptors, the ciliary pocket may be an analogous structure, and we believe a periciliary membrane specialization having a similar role in ciliary traffic exist in most primary cilia. In recent years, diverse tissues utilizing primary cilia for signaling are becoming recognized, and genetic defects affecting the machinery important for ciliary morphogenesis or function give rise to ciliopathies with multiple organ involvement including the retina. Our Section has been engaged in the study of RPGR, RPGRIP1, tubby proteins and Usher proteins, among others, which have prominent ciliary roles or interact with ciliary components. Going forward, we foresee a systematic dissection of the cilia proteome and interactome as an emerging theme of our Section. A second area of research is elastic fiber homeostasis in the eye and its implications for choroidal neovascularization (CNV) in age-related macular degeneration and glaucoma. A second area of our research interest involves elastic fiber homeostasis in ocular tissues mediated by LOXL1. LOXL1 polymorphism is a specific risk factor of pseudoexfoliation glaucoma (PEXG), the most common identifiable cause of open-angle glaucoma. Deposition of aggregated macromolecules in the eye and elastosis at the lamina cribrosa are hallmarks of this disease. LOXL1, a member of the lysyl oxidase family and a copper-dependent monoamine oxidase, was shown by us to be essential for elastic fiber synthesis in adult tissues. Thus impaired elastic fiber homeostasis underlies PEXG, and future challenges lie in further dissecting the disease mechanism and designing therapies. We also hypothesize that elastic fiber homeostasis has implications for AMD/CNV. The central elastic lamina of the Bruch’s membrane acts as a barrier against CNV, dramatically illustrated by angioid streaks appearing in pseudoxanthoma elasticum that develops breaks in the elastic lamina. A decline in LOXL1-mediated elastic fiber homeostasis due to advancing age could compromise the barrier function of the Bruch’s membrane and release soluble elastin-derived peptides known to promote neovascularization. Interventions aimed at promoting elastin polymer deposition may prevent or limit the aggressiveness of CNV. The ultimate goal of our research is to find therapies for blinding retinal degenerative diseases. We look to translate new knowledge into clinical studies, whenever it becomes feasible, that can be gene or mechanism-based. Along this line, we are actively engaged in several gene replacement studies. As our studies of disease mechanisms progress, we will take advantage of the new knowledge in the design of mechanism-based therapies.

Tiansen Li, Ph.D. is a senior investigator at the Neurobiology, Neurodegeneration & Repair Laboratory, National Eye Institute. He received his Ph.D. from Purdue University and did post-doctoral training in the Visual Sciences Center, University of Chicago. Prior to joining NEI, he was a principal investigator at the Department of Ophthalmology, Harvard Medical School at the Massachusetts Eye and Ear Infirmary. His primary research interest is in the inherited forms of retinal degeneration including its disease mechanism and therapies.