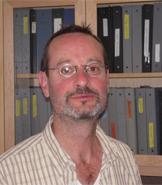 Research in the Molecular Genetics Section focuses on the mechanisms involved in gene expression of the alpha-herpesviruses: herpes simplex (HSV) and varicella zoster (VZV). As with all classes of herpesviruses, infection with HSV or VZV results in a primary infection followed by the establishment of a lifelong latent infection. Periodically, these latent viruses can reactivate or re-enter the lytic replication state, resulting in recurrent disease.

For herpes simplex virus, infection results in establishment of latency specifically in neurons of sensory ganglia, and reactivation produces disease that can range from mild oral or genital lesions to keratoconjunctivitis, blindness, neurological issues, and encephalitis.

Figure 1. The cycles of viral lytic and latency-reactivation. Upon primary infection with herpes simplex virus, the viral genome is injected into the nucleus, and viral genes are expressed in a regulated, sequential manner beginning with IE. IE products are required for the expression of later E and L genes. Progeny virus may then infect local sensory neurons where the virus becomes quiescent and lytic genes are not expressed. Various stress stimuli result in re-entry into the lytic replication cycle and production of virus that is released from the neurons and re-infects cells to produce recurrent disease.

IE genes are exceptionally complex and are regulated by multiple families of transcription factors and coactivators.

In addition to these direct factors, the virus is also regulated by an overlay of regulation that is determined by the host cell’s chromatin modulation machinery. Recent data have demonstrated that HCF-1 interacts with or is a component of numerous cellular chromatin modulation complexes, and it is in this capacity that it plays a significant role in modulating viral IE gene expression. Studies in the MGS are focused on the role of HCF-1-mediated chromatin control of HSV and other herpesvirus infection.

In addition to its role in regulation of the viral IE gene expression upon initial infection, HCF-1 also plays a significant role in replication of the viral genome, presumably via required chromatin modulation of DNA replication. The protein interacts with histone chaperones and localizes to foci of viral DNA synthesis at later times in infection. Continuing projects investigate the HCF-1 role and complexes in both viral and cellular DNA replication.

While HCF-1 is a critical component of the viral lytic replication cycle, it is also hypothesized to be a determinant of the latency-reactivation cycles. The MGS has demonstrated that HCF-1 is uniquely sequestered in the cytoplasm of sensory neurons where the virus establishes latency and is rapidly transported to the nucleus upon stimulation that results in viral reactivation. The MGS continues to investigate the role of HCF-1, its associated factors, and chromatin modulation components in the control of latency-reactivation.

Figure 5. HCF-1 is sequestered in the cytoplasm of sensory neurons and is rapidly relocalized to the nucleus upon stimuli that results in viral reactivation from latency.Immunohistochemical staining of unstimulated sensory ganglia (trigeminal ganglia) shows punctate cytoplasmic localization of HCF-1. Stimulation results in the accumulation of HCF-1 in the nuclei.

Dr. Kristie received his Ph.D. from the Committee on Virology at the University of Chicago for his work with Dr. Bernard Roizman on the regulation of herpes simplex virus gene expression. As a postdoctoral fellow with Dr. Philip Sharp at the Center for Cancer Research, Massachusetts Institute of Technology, Dr. Kristie focused on the interaction of components involved in the formation of transcriptional enhancer complexes. Dr. Kristie joined the NIAID Laboratory of Viral Diseases in 1993, became a senior investigator in 2000, and became chief of the Molecular Genetics Section in 2001.