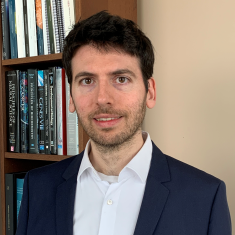 Advances in next-generation sequencing have revealed that cancer and neurological disorders are often associated with distinct transcriptomic signatures, including widespread alterations in alternative splicing, a process that vastly expands the coding potential of the genome. Loss- or gain-of-function mutations in splicing factors impact entire networks of coordinated alternative exons, which play critical roles in cell fate decisions and impact processes such as cell cycle control, neurogenesis and synaptic transmission. However, given that the functions of the overwhelming majority of alternative exons remain unexplored, Thomas Gonatopoulos-Pournatzis’ research program aims to identify individual events that control these fundamental biological processes, reveal how their disruption contributes to disease- or disorder-related phenotypes, and explore the regulatory networks that control these events.

To advance the systematic mapping of genetic interactions and interrogation of the functions of sizeable genomic segments, we have developed a CRISPR-based screening system for combinatorial genetic perturbations, named CHyMErA. CHyMErA employs co-expression of Cas9 and Cas12a nucleases and libraries of hybrid Cas9-Cas12a guide RNAs that can be employed for multi-targeted genome editing. We have applied CHyMErA in human cells to uncover novel genetic interactions between paralog gene pairs. Importantly, we have also used CHyMErA to systematically target thousands of alternative splicing events, identifying dozens of exons underlying cell fitness. CHyMErA thus represents an effective screening approach for genetic interaction mapping and the functional analysis of sizeable genomic regions, such as alternative exons.

Functional Exomics: Future application of CHyMErA screens coupled to high-throughput phenotyping will enable the efficient functional characterization of alternative exons in the human genome and the identification of novel targets for precision medicine applications.

Technology Development: A major goal of the Gonatopoulos-Pournatzis team is to continue developing cutting-edge technologies that will enable the systematic and efficient functional characterization of transcript isoform diversity and genetic interactions.

A program of neuronal-specific, highly conserved microexons is frequently disrupted in the brains of patients with autism spectrum disorder (ASD). We have started to identify individual microexons that contribute to ASD-associated phenotypes by characterizing a set of neuronal microexons in the translation initiation factors eIF4G1 and eIF4G3. The eIF4G microexons selectively up-regulate synaptic proteins that control neuronal activity and plasticity, and mice lacking the Eif4g1 microexon display social behavior as well as learning and memory deficits. Future studies are focused on uncovering additional microexons with such critical roles for animal behavior and cognitive functioning.

The Gonatopoulos-Pournatzis group is looking for enthusiastic lab members who wish to explore the complexity of the mammalian transcriptome and we have several openings for Postdoctoral Fellows and Postbaccalaureate Fellows. If you are interested in our work, please send your C.V., a statement of research interests and the names and contact details of 2-3 references to thomas.gonatopoulos@nih.gov.

Dr. Gonatopoulos-Pournatzis obtained his bachelor’s degree in biology from the Kapodistrian University of Athens in Greece (2007) before moving to King’s College London in England to earn his master’s degree (2008). In 2013, Dr. Gonatopoulos-Pournatzis obtained his Ph.D. from the University of Dundee in Scotland where he worked in Prof. Vicky Cowling’s laboratory studying mechanisms underlying mRNA cap methylation and gene expression. For his postdoctoral research, he joined Prof. Ben Blencowe’s laboratory at the University of Toronto in Canada to study the regulation and function of splicing regulatory networks in neurons with the support of EMBO-LTF, CIHR and OIRM postdoctoral fellowships. During his training Dr. Gonatopoulos-Pournatzis received multiple prizes and awards, including the Baxter Prize (2012) and the Donnelly Centre Research Excellence Award (2018). Dr. Gonatopoulos-Pournatzis joined the RNA Biology Laboratory at NCI-Frederick in 2020 to establish the Functional Transcriptomics Section, where he is developing and applying CRISPR-based tools to systematically uncover transcript variants with critical phenotypic roles.