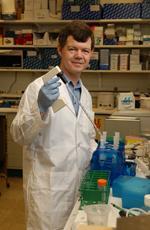 The Molecular Mechanisms Section of the Laboratory of Retinal Cell & Molecular Biology studies vitamin A and lipid metabolism, and signaling and regulation processes central to vision and function of the retina and the retinal pigment epithelium (RPE). The RPE is a single layer of cells lining the back of the retina and plays a pivotal role in the development and function of the outer retina. Without these cells, the retinal photoreceptor cells, and vision itself, could not function. RPE dysfunction has serious repercussions on photoreceptor viability. Inherited diseases of the RPE as well as the effects of aging on the RPE result in loss of visual acuity and blindness, with major medical and economic impacts. The most important of these diseases is age-related macular degeneration (AMD), which is growing in prevalence with the aging of our population. The RPE-specific mechanism of major interest to us is the visual cycle, the cyclical process by which vitamin A (all-trans retinol) is converted to the form (11-cis retinal) required for vision. In the process of light absorption by retinal photoreceptors, the 11-cis retinal chromophore bound to visual pigment is photo-isomerized to the all-trans isomer. The all-trans retinol is returned to the RPE and enzymatically isomerized to the 11-cis isomer. This in turn is oxidized to 11-cis retinal and then secreted to the photoreceptors to regenerate the visual pigment. We are studying the role of RPE65, a developmentally regulated, highly preferentially expressed RPE protein, in this process. Our biochemical and molecular genetics studies in mouse models and human genetic eye disease show that RPE65 is essential to the operation of the visual cycle. Recently, somatic RPE65 gene therapy trials have succeeded in partially restoring vision in patients with RPE65 mutations. We have established that RPE65 is in fact the key isomerohydrolase in the visual cycle and is part of a family of enzymes that are specialized in carotenoid metabolism- including the enzyme that converts ß-carotene into vitamin A. Thus RPE65 plays a central and irreplaceable role in vision. Our ongoing goals are to elucidate the mechanism of action of RPE65 and to determine how it is integrated into the overall visual cycle. RPE65 is a carotenoid oxygenase that has specifically evolved into an enzyme that is capable of hydrolyzing and isomerizing all-trans retinyl ester into 11-cis retinol but that is specialized to the extreme. Many aspects of its catalytic mechanism are unknown. Understanding its catalytic mechanism may help in rational design of small molecules for treating blindness due to visual cycle defects. As a post-mitotic non-renewing epithelium, the RPE is exposed to variety of life-long stresses, including exposure to light, inflammatory mediators, and reactive oxygen species. Apoptotic RPE cell death resulting from chronic oxidative stress and other stresses may play a role in the onset of AMD. Such additional stresses include accumulation of bisretinoid compounds, byproducts of the visual cycle that accumulate with age, also called lipofuscin. The synthetic retinoid analog N-(4-hydroxyphenyl) retinamide (4HPR; fenretinide), in long use as a cancer preventive agent, has recently been proposed as a therapeutic agent for lipofuscin-based retinal diseases such as AMD. 4HPR is rather pleiotropic in action and mimics or antagonizes many functions of retinoids, including retinoic acid, which affects many cellular functions including cell growth, differentiation, and apoptosis. We are interested in how these effects of 4HPR are mediated, given its proposed therapeutic use in AMD and other retinal diseases. We have found that 4HPR’s effect on cells may be mediated in part by its action on stearoyl CoA desaturase (SCD), an important rate-limiting enzyme in monounsaturated fatty acid biosynthesis. In addition, we are investigating mechanisms of post-transcriptional regulation in the RPE, including by miRNAs. This is directed towards discerning how the native phenotype of RPE’s biochemical systems, especially with regard to lipid metabolism, retinoid metabolism, phagocytosis, etc., is maintained. RPE is a highly specialized tissue and understanding its complexity is crucial towards a clear biochemical understanding of AMD. Many aspects of its importance to photoreceptor function are as yet poorly understood. Such insights will also be helpful in characterizing what is necessary to achieve sufficient differentiation of stem cells to RPE for use in regenerative biology.

Dr. Redmond received his Ph.D. in 1983 from University College, Dublin (Ireland) following graduate training at Dr. Rosalie Crouch’s lab at the Medical University of South Carolina, Charleston, SC. He received post-doctoral training as a Visiting Fellow, and then Staff Fellow, with Dr. Barbara Wiggert and Jerry Chader in the Laboratory of Retinal Cell & Molecular Biology (LRCMB), National Eye Institute (NEI), investigating interphotoreceptor retinoid-binding protein (IRBP). Dr. Redmond was tenured in 1990 as research biologist in LRCMB when he began to study RPE65, then newly discovered by him and his group. Dr. Redmond and his colleagues demonstrated the essential role of RPE65 in vision, that mutations in the human RPE65 gene cause Leber congenital amaurosis (LCA), that RPE65 is necessary for the all-trans to 11-cis isomerization of vitamin A in the retina, and that RPE65 is the crucial retinol isomerase enzyme of the vitamin A visual cycle. In addition, his group was the first to identify and clone the mammalian beta-carotene monooxygenase 1 (BCMO1) enzyme, a close relative of RPE65 that catalyzes the first step in formation of vitamin A from pro-vitamin A carotenoids in animals.