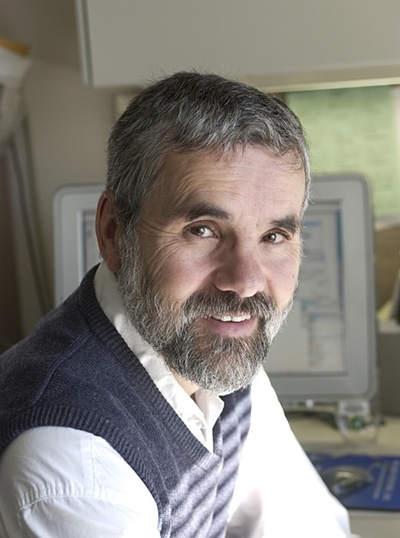 Signaling and Secretion in Neuroendocrine Cells

The main objective of our work has been to understand how hypothalamic and pituitary cells use ion channels and G protein-coupled receptors (GPCR) as signaling platforms in order to efficiently process information, both intercellularly and intracellularly. To achieve this, the lab comprises an interdisciplinary team and collaborators with expertise in cellular and molecular biology, biochemistry, biophysics, fluorescence imaging, electrophysiology, and mathematical modeling. Initially, our investigations were focused on voltage-gated ion channels and their roles in calcium signaling and gene expression coupled to hormone synthesis, packaging of secretory vesicles, and exocytosis. We followed this research with studies on identification of channels critical for the cell type-specific electrical activity and action potential-dependent cellular processes. In parallel to these studies, we investigated the oscillatory and non-oscillatory gating modes of inositol trisphosphate receptor channels coupled to intracellular calcium signaling and synchronization of electrical activity with calcium transients. More recently, we discovered that pituitary cells express ligand-gated purinergic P2X, nicotinic, and GABA-A receptor channels, and studied their roles in electrical activity, calcium signaling, and calcium dependent cellular functions. The major focus in these investigations was on structural and functional characterization and gating properties of P2X channels as well as their functional interaction with pannexin channels. Our main interest with GPCRs has been on pituitary gonadotropin-releasing hormone, endothelin, thyrotropin-releasing hormone, dopamine, and corticotropin-releasing hormone receptors and their roles in electrical activity, intracellular signaling, gene expression, and secretion. In parallel to investigations on ion channel and GPCR physiology, we initiated a collaborative work on mathematical modeling of our experimental findings in order to provide better understanding of the signaling properties of these molecules. The current focus in investigations is on genetic and functional heterogeneity of secretory anterior pituitary cells, the expression and role of small integrin-binding ligand N-linked glycoproteins in pituitary functions, and the role of membrane lipid composition in pituitary cell exocytosis.

Dr. Stanko Stojilkovic received a Ph.D. in Physiology and Neuroendocrinology from the University of Novi Sad, Serbia, in 1982. He was Assistant Professor of Physiology at the Faculty of Sciences, University of Novi Sad, before joining NICHD as a Guest Researcher in 1985, where he worked in the laboratory of Dr. Kevin J. Catt. Dr. Stojilkovic became an Investigator in 1993, leading the Section on Cellular Signaling, and then Senior Investigator in 1998, both within the Endocrinology and Reproduction Research Branch of NICHD.  His work has earned the group recognition, which is reflected in 260 publications, including several review articles and chapters in university textbooks, and approximately 90 seminar and conference invitations. Dr. Stojilkovic is member of the Endocrine Society, American Society for Biochemistry and Molecular Biology, American Neuroendocrine Society, and Society for Neuroscience. He has also been inducted into the Serbian Academy of Sciences and Arts (2003) and has received a Doctor Honoris Causa (2010) from the University of Novi Sad. He is/was on Editorial Boards of eight journals, including Endocrinology, Molecular Endocrinology, and the Journal of Biological Chemistry.