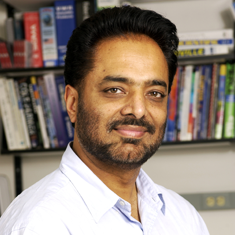 It is fascinating to consider how a multitude of cell types originate during development from a single genome. Epigenetic mechanisms allow specific gene expression outputs and involve DNA and histone modifications, including those associated with heterochromatin, a repressive form of chromatin. Heterochromatin maintains global patterns of gene expression and protects genomic integrity by prohibiting recombination between repetitive DNA elements and promoting proper segregation of chromosomes. Defects in heterochromatin mechanisms can lead to chromosome abnormalities that underlie many diseases, including cancer.

Excitingly, our current research has revealed that multiple pathways converge to enforce a single key feature crucial for epigenetic inheritance of heterochromatin, namely the critical density of tri-methylated histone H3 lysine 9 (H3K9me3) that is required for self-propagation. Our work suggests a model in which tethering of heterochromatin domains at the nuclear periphery provides an ideal microenvironment to maintain a high density of H3K9me3, thus facilitating self-templated inheritance of silenced domains through read/write histone methyltransferase activity. However, despite significant progress, much still remains to be discovered. Below are our current research areas.

Although silenced chromatin domains are often observed at the nuclear periphery, the purpose of this genome organization had remained unclear. We have discovered that the evolutionarily conserved process of peripheral tethering of heterochromatin promotes stable propagation by creating a microenvironment for loading of silencing effectors that maintain the threshold density of methylated histones required for self-templated heterochromatin propagation. We are further exploring how heterochromatin factors are coordinated to enforce silenced domains and support their stable propagation.

Biological Implications of Defects in RNA Elimination and Heterochromatin Assembly: Our work has revealed that heterochromatin shapes the three-dimensional (3D) architecture of the genome. In particular, heterochromatin formed at centromeres and telomeres provides structural constraints that are crucial for proper genome organization. Indeed, we have found that loss of heterochromatin relaxes constraints on chromosomes. Moreover, our analyses revealed that the arms of chromosomes are organized into ~50-100kb locally crumpled self-interacting chromatin domains called globules, which are dependent on cohesin. Together, heterochromatin- and cohesin-mediated organization promotes chromosome territoriality and facilitates functional genomic annotation. Our work has uncovered fundamental genome folding principles that drive higher-order chromosome organization crucial for coordinating nuclear functions. We are continuing to explore the importance and biological implications of 3D genome organization as cells respond to various signals including replication stress.

Defects that result in inappropriate gene expression can cause devastating consequences. We have found that untimely activation of the silenced gametogenic program (such as in cells lacking RNAi machinery or the RNA elimination factor Mmi1) triggers uniparental disomy (UPD), in which cells contain two copies of a chromosome originating from only one parent.  UPD is frequently associated with congenital disorders and cancer. Our analyses revealed that UPD is linked to the misexpression of Rec8, a meiotic cohesin that is only expressed in cells undergoing sexual differentiation and promotes reductional chromosome segregation. Rec8 misexpression in mitotic diploid cells causes aberrant segregation and UPD. This work has important implications for understanding the UPD phenomenon in humans and provides a solid foundation for the development of therapies to treat diseases, including various cancers linked to the aberrant expression of germline genes in somatic cells.

Dr. Grewal began his scientific career at the University of Cambridge, UK, where he held the prestigious Cambridge-Nehru scholarship. In 1993, he joined National Cancer Institute as a postdoctoral fellow to pursue his interests in the epigenetic control of gene expression. Apart from his pioneering work on the role of centromeric repeats in heterochromatin assembly, he showed that epigenetic imprints can be stably propagated through meiosis and in some instances inherited in cis. Dr. Grewal joined Cold Spring Harbor Laboratory as an Assistant Professor in 1998, and was promoted to Associate Professor position. In 2003, he joined National Cancer Institute, Bethesda as a Senior Investigator. He has been named an NIH Distinguished Investigator and is currently serving as the Chief of the Laboratory of Biochemistry and Molecular Biology and the Head of the Chromosome Biology Section of the Center for Cancer Research, National Cancer Institute. Dr. Grewal and colleagues discovered a highly conserved connection between RNAi and heterochromatin assembly. This important contribution was selected as Breakthrough of the Year 2002 by Science magazine. Three papers from Dr. Grewal's laboratory are cited for historic discoveries over the past 50 years by Nature. He is recipient of the prestigious Newcomb-Cleveland Prize, NIH Merit Award, and the NIH Directors’ award. Dr. Grewal has been elected to the US National Academy of Sciences and the American Academy of Arts and Sciences.