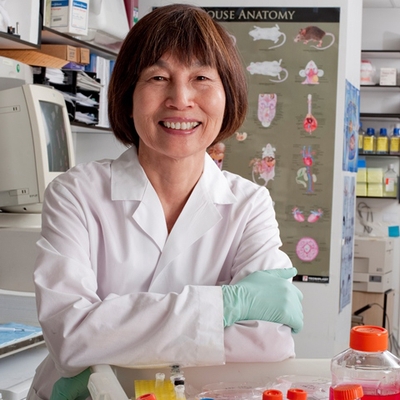 Our research goals are to elucidate the molecular actions of thyroid hormone receptor (TR) mutants and understand their roles in disease. TRs are thyroid hormone (T3)-dependent transcription factors that are critical in growth, differentiation, and development, and in maintaining metabolic homeostasis. TRs are derived from two genes, alpha and beta, that encode four T3-binding TRs: alpha1, beta1, beta2, and beta3. Given the pivotal roles of TRs, it is reasonable to expect that their mutations could lead to deleterious effects. Indeed, mutations of the THRB gene are known to cause a genetic disease, resistance to thyroid hormone (RTH). Very recently, patients with severe hypothyroidism were found to have mutations in the THRA gene. To understand how TRbeta and TRalpha mutants act in vivo to cause these diseases in patients, we have developed genetically engineered mouse models (ThrbPV mice and Thra1PV mice, respectively). These mouse models are being used not only to dissect the molecular actions of TR mutant isoforms in vivo, but also to identify potential therapeutic targets. We learned that the molecular actions of TR mutants are iso-form-dependent, leading to different human diseases. Furthermore, that TRalpha mutants seemingly cause more deleterious effects than TRbeta mutants.  Importantly, these models serve to advance understanding of the abnormal regulation of other mutated nuclear receptors and transcription factors in human disease.

In addition, we have also created mouse models to studying the molecular genetic events underlying thyroid carcinogenesis. We have created mouse models of aggressive thyroid cancer such as metastatic follicular thyroid cancer (ThrbPV/PV and ThrbPV/PVPten+/- mice) and anaplastic thyroid cancer (ThrbPV/PVKrasG12D). In a series of publications in high-impact peer-reviewed journals, such as Proceedings of the National Academy of Sciences USA, Cancer Research, Journal of Clinical Investigation, Oncogene, Molecular and Cellular Biology, Endocrine Related Cancer, Neoplasia, we have reported the identification of several aberrant signaling pathways during thyroid carcinoigenesis, involving the activation of tumor promoters such as MYC, cyclin D1, beta-catenin, phosphatidylinositol 3-kinase (PI3K), AKT and pituitary tumor transforming gene, and repression of tumor suppressors such as peroxisome proliferator activating receptor gamma (PPARgamma). Several potential targets were identified and tested in these pre-clinical mouse models, which could be translated for clinical testing.

Dr. Sheue-yann Cheng obtained her Ph.D. from the University of California, San Francisco Medical Center. She received her postdoctoral training at the University of Chicago and the National Institute of Diabetes and Digestive and Kidney Diseases. She joined the NCI as a principal investigator in 1979 and was promoted to Section Chief in 1991. She was promoted to the rank of senior investigator in 2016. Dr. Cheng is well recognized nationally and internationally for her outstanding work in understanding the molecular actions of mutant thyroid hormone receptors in vivo and the biology of thyroid hormone nuclear receptors. For her scientific accomplishments, she was awarded the NIH Merit Award for outstanding achievements, the Scientific Achievement Award from the Chinese Medical and Health Association, the Charles Harkin Award of the NCI, the Sidney H. Ingbar Distinguished Lectureship Award of the American Thyroid Association, and the Abbott Thyroid Research Clinical Fellowship Mentor Award of The Endocrine Society. She is a recipient of  John B. Stanbury Thyroid Pathophysiological Medal of the American Thyroid Association.She served as a regular member of the NIH Molecular and Cellular Endocrinology Study Session and as an advisor for Howard Hughes Medical Institute-NIH Research Scholars. She served as a Women Scientist Advisor of the Center of Cancer Research, NCI. Currently she is an Associate Editor of Thyroid, Associate Editor-in-Chief of the American Journal of Cancer Research, Associate Editor of Frontier-Endocrinology-Thyroid and also is on the Editorial Boards of several prominent journals. Dr. Cheng research focuses on understanding the biology and molecular actions of thyroid hormone receptors in health and disease. Dr. Cheng describes her current research below.