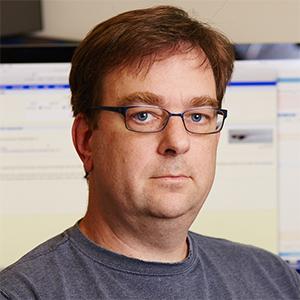 For the last decade, the Burgess lab has focused on developing technologies to systematically annotate the functions for all the genes in a vertebrate genome. After completion of the human genome sequence, approximately 70 percent of the protein-coding genes could be assigned a putative function based on at least one identified Pfam domain. However, for the vast majority of these genes, assigned functions are inferred and their true in vivo functions have never been directly tested. Because the genomes of the vertebrate model organisms mouse (Mus musculus) and zebrafish (Danio rerio) have also been sequenced, they offer the opportunity to test the function of every vertebrate gene, and by extension, the function of their human homologs.

In previous work, Dr. Burgess participated in a large-scale genetic screen for embryonic lethal phenotypes in the zebrafish. This effort used proviral insertions as the mutagen, allowing for rapid cloning of the mutated gene. To date, this effort represents the largest number of mutations identified, phenotyped, and cloned from a vertebrate genetic screen (Golling et al., Nat Gen 2002). Upon his arrival at NHGRI, Dr. Burgess' Developmental Genomics Section (DGS) simultaneously began both characterizing in detail a number of mutants causing developmental defects in the zebrafish inner ear, and preparing the groundwork for a more systematic approach to mutating and phenotyping all zebrafish genes. The Burgess group developed new techniques for high-throughput identification of retroviral integration sites, and rapidly identified proviral insertion sites as a first step in developing a pipeline to mutate all the genes in the zebrafish genome. They then successfully mutagenized zebrafish embryos, mapped thousands of insertion sites and created a large pool of mutant zebrafish lines (Wang et al., PNAS 2007, Varshney et al., Genome Res, 2014). Using this approach, the DGS generated mutations in over 5,000 zebrafish genes, or approximately 25% of the total genes in the zebrafish genome. Dr. Burgess has arranged for the Zebrafish International Stock Center (ZIRC) to distribute these mutants to the research community, essentially free of charge.

More recently, Dr. Burgess has turned his mutagenesis efforts to targeted knockouts using CRISPR/Cas9 technology, gaining full control over which genes are inactivated. As a result, targeted screening in a vertebrate is now possible for the first time, realistically surveying 5-10 percent of the genome for relevant phenotypes in any biological process.

Hearing development and regeneration remains an area of interest in the DGS, used to test the utility of systematic genetic approaches. As a proof-of-principle pilot screen for a Zebrafish Phenome Project, the Burgess group plans to phenotype 5-10 percent of zebrafish genes. In order to bias the screening towards genes of biological interest to researchers, only genes suspected to be linked to human genetic diseases will be knocked out, in collaboration with the Undiagnosed Diseases Network. All the known genes linked to human deafness will also be targeted, in order to create new animal models relevant to one of the most common health problems in the United States. Finally, all known receptor kinases will be investigated to determine the in vivo function for every gene in this important class of signaling molecules. This work will provide new biological insights, while simultaneously allowing the Burgess lab to develop a high-throughput phenotyping pipeline that will be expanded eventually to cover the entire genome.

Dr. Burgess' mutagenesis and phenotyping efforts address a variety of questions ranging from systematically characterizing cell signaling molecules to generating animal models for rare genetic diseases. For example, his lab is inactivating all tyrosine kinases in zebrafish and carefully characterizing the phenotypes for these mutants, in addition to working closely with the Undiagnosed Diseases Network to knock out genes that are predicted to cause rare genetic disease.

Dr. Burgess is now merging large-scale mutagenesis and phenotype characterization into a novel approach to functionally annotate a vertebrate genome. NIH is the site for one of the world's largest zebrafish aquatic research facilities, whose massive capacity provides the space necessary to begin systematically phenotyping zebrafish mutations on a scale not previously possible. In collaboration with other labs around the world, the Burgess group plans to phenotype mutations in every zebrafish gene, creating a whole "phenome" for zebrafish. Measured phenotypes will range from early development to adult tissue regeneration. This unique resource will accelerate discovery in every facet of biomedical research.

Dr. Burgess received his Ph.D. in genetics from the Johns Hopkins University School of Medicine, where he studied the genetics of mitochondrial fusion and fission in yeast. He trained with Nancy Hopkins, Ph.D., at the Massachusetts Institute of Technology, where he was part of a large effort to develop insertional mutagenesis in zebrafish, coupled with a genetic screen to identify genes essential for early development of a vertebrate. Since 2001, he has been at the National Human Genome Research Institute, where he is a senior investigator and heads the Developmental Genomics Section.

Much of Dr. Burgess' work in the last decade has been focused on developing efficient gene knockout technologies in zebrafish, coupled with efficient phenotyping of the gene disruptions.