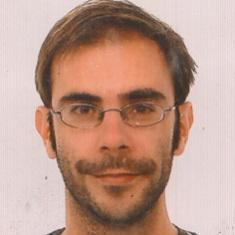 We use human and mouse embryonic stem cells (ESCs) as a model to elucidate the molecular mechanisms underlying the acquisition (somatic cell reprogramming) and maintenance of pluripotency and self-renewal. These cell types represent a unique system to study the basis for unlimited growth and cell transformation, as well as to model disease in vitro and use them for the discovery of new drugs in specific differentiated cell types. In addition, we have recently showed that these cells are a great cellular platform in which to perform CRISPR/Cas9-based forward genetic screens.

Role of ETS-Transcription Factors in Regulating Cell Fate
Although mouse ESCs (mESCs) are routinely cultured by the use of a combination of leukemia inhibitory factor (LIF) and serum, it has been shown that MEK inhibition in combination with a glycogen synthase kinase-3 (GSK3b) inhibitor, referred as the 2i condition, was sufficient to favor pluripotency in mESCs. However, the mechanisms by which the 2i condition impairs ESCs differentiation and whether RAS proteins are involved in this phenomenon was poorly understood. We have recently shown that RAS nullyzygosity reduces the growth of mESCs and prohibits their differentiation. We also observed that upon complete RAS depletion or MEK inhibition, ERF, a transcriptional repressor from the ETS (E26-Transformation Specific)-domain family, translocates to the nucleus where it binds to the enhancers of pluripotency factors and key RAS targets. Remarkably, we determined that deletion of ERF rescued the proliferative defects of RAS-devoid mESCs and restored their capacity to differentiate. The ETS transcription factor (TF) family is one of the largest families of TFs including 29 genes in humans and 28 in mouse and has been widely involved in cancer. Nonetheless, little is known about their role in the maintenance of pluripotency/self-renewal in ESCs or during embryogenesis and cell commitment. Our current efforts are focused on understanding the critical role of this TF family in the stem cell biology.

Molecular Determinants of Totipotency
Totipotency refers to the cell state of maximum developmental plasticity and on which a single cell is able to generate a whole organism. This characteristic is found in embryonic blastomeres but rarely detected in cultured mESCs, which are considered to be pluripotent due to their ability to originate the three embryonic germ layers but their inability to differentiate towards extra-embryonic tissues. The lack of homogeneous well-defined totipotent cell cultures and the difficulty on stabilizing this cell state has been an enormous hurdle to study this cell state in vitro. Our laboratory is working to elucidate the molecular mechanisms involved in the maintenance and acquisition of totipotency, which will help to understand the first steps of early mammalian ontogeny and whether they are recapitulated during cancer. We follow on the idea that the totipotent state might be relevant somehow during cancer formation and progression. Therefore, by defining the molecular players involved in the maintenance of totipotency we expect by extension, find new ways to understand and thus, attack cancer.

Development of New CRISPR-based Technologies
Editing technology based on the RNA-guided Cas9 nuclease from the type II prokaryotic clustered regularly interspaced short palindromic repeats (CRISPR) adaptive immune system for mammalian cells has completely changed the way we currently do experiments in our labs. This technology allows the RNA-guided localization of the nuclease Cas9 at specific DNA sequences to induce double strand brakes (DBSs) and thus, using endogenous repair mechanisms, perform precise genome editing in cells. In addition, the CRISPR/Cas9 system has been successfully repurposed to promote or repress gene expression, facilitate endogenous imaging or induce epigenome DNA editing among others. We are using these technologies and developing new ones to study the biology of embryonic stem cells.

Dr. Sergio Ruiz Macias received his Ph.D. in cell and molecular biology from the Complutense University in Madrid in 2004. As part of his postdoctoral training, he first joined the laboratory of Dr. Juan Carlos Izpisua-Belmonte at the SALK Institute in 2007 and then, as staff scientist in 2012, the group led by Dr. Oscar Fernandez-Capetillo at the Centro Nacional de Invesigaciones Oncológicas (CNIO) in Madrid, where he developed his interests in embryonic stem cell biology and CRISPR/Cas9-based screens. He was then recruited to the NIH at the Laboratory of Genome Integrity, NCI, in May 2018 as part of the Earl Stadtman Investigator recruitment program.