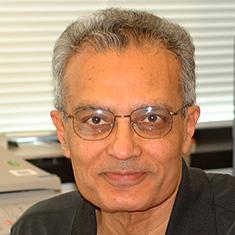 Virtually every adaptation and developmental process originates at the level of gene regulation by transduction of extra- or intracellular signals. Transcription is the major target of regulation of gene expression. Our research interest covers modulation of transcription by DNA control elements and regulatory proteins, for example, repressors, activators, terminators, and antiterminators and their cognate signal molecules. We have demonstrated transcriptional regulation both at the level of initiation by activators and repressors and at the level of elongation by terminators and antiterminators in the gal operon which encodes enzymes of D-galactose metabolism in Escherichia coli. Presumably because of the amphibiotic nature of the biochemical pathway in carbon metabolism, the operon shows a multitude of controls at all levels of transcription and has been a paradigm system for studying control of transcription. The operon is transcribed from two promoters which are subject to both negative and positive control by at least four proteins, Gal repressor, Gal isorepressor, cyclic AMP receptor protein, and bacterial histone like protein, HU.

The lysis-lysogeny decision of bacteriophage λ is a paradigm for developmental genetic networks. Two key features characterize the λ network. First, after infection of the host bacterium, a decision between lytic or lysogenic development is made that is dependent upon environmental signals and the number of infecting phages per cell. Second, the lysogenic prophage state is very stable. The CI and Cro regulators define the lysogenic and lytic states, respectively, as a bistable genetic switch. Whereas CI maintains a stable lysogenic state, recent studies indicate that Cro sets the lytic course not by directly blocking CI expression but indirectly by lowering levels of CII, which activates CI transcription. We are investigating how a relatively simple phage like λ employs a complex genetic network in decision-making processes, providing a challenge for theoretical modeling. Recently, we have made the following observations:

Bacterial necleoid organization is believed to have minimal influence on the global transcription program. Using an altered bacterial histone-like protein, HUα, we show that reorganization of the nucleoid configuration can dynamically modulate the cellular transcription pattern. The mutant protein transformed the loosely packed nucleoid into a densely condensed structure. The nucleoid compaction, coupled with increased global DNA supercoiling, generated radical changes in the morphology, physiology, and metabolism of wild-type Escherichia coli K-12. Many constitutive housekeeping genes involved in nutrient utilization were repressed, whereas many quiescent gene associated with virulence were activated in the mutant. We propose that, as in eukaryotes, the nucleoid architecture dictates the global transcription profile and, consequently, the behavior pattern in bacteria. We are investigating whether the E. coli nucleoid has a defined structure. In support of that we have made the following observations:

Bacteriophage (phage) have been used in treatment of bacterial infections in humans since their discovery many decades ago, but the practice was discontinued because of lack of scrutiny required for Western medicine, and because of the discovery of potent antibiotics. Widespread occurrence today of drug resistant pathogens motivated us to attempt to revive phage-based diagnosis and treatment of bacterial infections using E. coli and Yersinia pestis as model systems.

In these studies, we used λ and T7-like phages that we mutated or engineered for use in therapy of experimental bacteremic animals, in the investigation of mutation rates in cancer cells and in the detection of E. coli and Yersinia pestis in clinical and environmental samples.