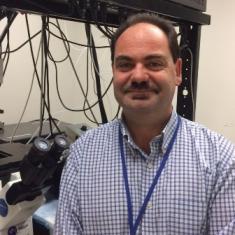 Neutrophils in action during inflammation in vivo

Membrane trafficking plays a key role in many basic cellular processes and unraveling its molecular machinery is a fundamental step in understanding physiological and pathological events in different tissues. Most of the studies in this field have been carried out in cell and organ cultures. These model systems, that can be easily imaged and manipulated, have provided invaluable information on the mechanisms regulating subcellular events. However, they have major limitations since they do not always recapitulate the complex characteristics of the living tissues in the native environment. To overcome this issue, we have developed subcellular intravital microscopy (IVM), a combination of light microscopy techniques, such as two-photon and confocal microscopy, which enables the direct observation of the intracellular process in live animals. This has been complemented with the development of a series of pharmacological, molecular, and genetic tools that have made possible the investigation of membrane trafficking in vivo at a molecular level.

The two central questions that drive our research are: 1) how membranes continuously change their shape and composition during trafficking events such as endocytosis and exocytosis at the plasma membrane under physiological conditions; 2) how these processes are deregulated during tumor progression, invasion, and metastasis. Specifically, our effort has been directed towards understanding the spatiotemporal coordination of actin cytoskeleton, cell signaling, and cellular metabolism, which is essential in controlling membrane remodeling. To this end, we developed two model systems. The first, based on exocrine glands in live rodents, has been instrumental in unraveling a novel role of an actomyosin complex, which during regulated exocytosis is re-organized at the interface between secretory vesicles and the cell surface in order to drive protein secretion and maintain plasma membrane homeostasis. The second, based on xenografts and carcinogen models for head and neck squamous cell carcinomas, has been instrumental in revealing the role of small GTPases of the Rab family in promoting invasion and metastasis by regulating the dynamics of F-actin at the cell surface. Studies elucidating the signaling networks that elicit the actomyosin-driven membrane remodeling, and the modifications in mitochondrial metabolism, which sustain the bioenergetics of these processes, are in progress.

Dr. Weigert obtained his B.Sc. in chemistry in 1992 from the University of Catania (Italy). He joined the Department of Cell Biology at the Mario Negri Institute (Dr. Alberto Luini) and in 2000 he received his Ph.D. from the Open University of London. In 2001 Dr. Weigert joined the NHLBI at NIH, as a research fellow in the Laboratory of Cell Biology (Dr. Julie Donaldson). In 2006, he joined the NIDCR as chief of the Intracellular Membrane Trafficking Unit, and he was tenured in 2014. In 2015, Dr. Weigert joined the Laboratory of Cellular and Molecular Biology at the NCI.