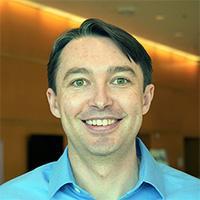 The fates and functions of RNA molecules in a cell are manifold. They may be translated, degraded, or in the case of retroviral RNA, even reverse transcribed into DNA and integrated into the genome. Dr. Hogg studies how RNAs attain unique functions in the cell by their intimate associations with proteins as part of ribonucleoprotein complexes (RNPs). In particular, his focus has been on quality control and RNA surveillance: How does a cell distinguish and respond to aberrant RNAs, whether produced internally or introduced virally? His goal is to dissect mechanisms of RNP assembly and understand how particular RNA-protein interactions determine mRNA function and decay.

Each stage in the maturation and cytoplasmic lifetime of messenger RNAs (mRNAs) is determined by the activity of tens to hundreds of proteins functioning in a network of protein-protein and protein-RNA interactions. Determining the protein composition of mRNPs containing specific mRNAs has been a major challenge and an impediment to understanding the relationship between RNP assembly and RNA functions. Dr. Hogg has developed a universal method for the purification of RNPs assembled on tagged RNAs in vivo. The tag, in this case, is a RNA “hairpin” that binds the Pseudomonas phage 7 coat protein (PP7CP) with high affinity and specificity. Once expressed in mammalian cell lines, tagged RNAs can then be affinity-purified from cell extracts with PP7CP in a single step. When combined with advances in mass spectrometry technology, this approach is a powerful method to study mRNP composition and dynamics in vivo.

A major focus of the lab is to study how the nonsense-mediated mRNA decay pathway recognizes and degrades transcripts containing stop codons at sites distant from the poly(A) tail (i.e. mRNAs with long 3’ UTRs). Using PP7CP-based affinity purification of endogenously assembled mRNPs, Dr. Hogg has demonstrated that the key nonsense-mediated decay factor Upf1 associates with mRNAs in a 3’ UTR length-dependent manner. His findings have led to the development of a model for mRNA quality control surveillance by Upf1 in which non-specific binding of Upf1 to 3’ UTRs allows the protein to sense 3’ UTR length. Enhanced accumulation of Upf1 on long 3’ UTRs would increase the probability that the protein will interact with release factors at a terminating ribosome, a central event in the initiation of mRNA decay. He is currently investigating the regulation of Upf1 association with mRNPs and the molecular events required for the transition between Upf1 binding to mRNPs and the commitment to decay.

In addition to cellular mRNAs, Dr. Hogg is studying the fates of retroviral RNAs. Retroviral transcripts contain elements that allow them to be transcribed at high levels, overcome blocks to nuclear export of unspliced RNAs, be efficiently translated despite significant RNA secondary structure, evade cellular mRNA surveillance machinery, and be efficiently packaged into nascent viral particles. To achieve each of these functions, viral RNAs and proteins collaborate or compete with host cell factors, ensuring efficient viral replication. Despite the central importance of RNP assembly pathways in the biogenesis and activity of viral RNAs, crucial questions remain regarding the mechanisms by which multiple RNAs produced from a single locus can attain very different fates.

J. Robert Hogg graduated from Haverford College in 2000 with a B.S. in biology and earned a Ph.D. from the Department of Molecular and Cell Biology at the University of California, Berkeley in 2006. His thesis research at UC Berkeley focused on the composition and function of ribonucleoprotein complexes containing noncoding RNAs. He pursued postdoctoral research at Columbia University, where he studied mechanisms of mRNA biogenesis and quality control. He joined the NHLBI in 2012 as an Earl Stadtman tenure-track Investigator.

This page was last updated on September 3rd, 2021