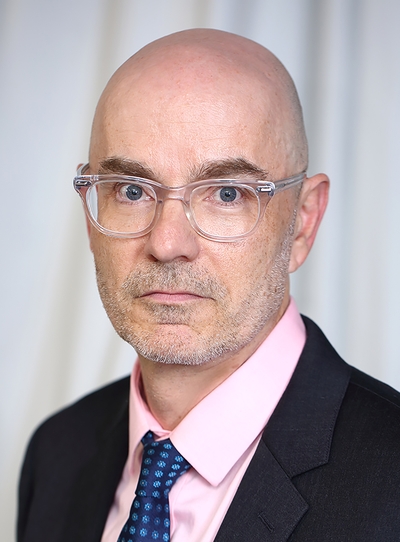 Dr. Krauzlis investigates how the brain controls voluntary eye movements, and how voluntary movements provide a foundation for understanding high-order brain processes such as visual attention, perception, and cognition. During his graduate work, he developed one of the best-known computational models of smooth pursuit eye movements, which explains how key aspects of eye motor output depend on visual processing, and then used this model to explain how neurons in the cerebellum generate the motor commands for this voluntary movement. As a postdoc, Dr. Krauzlis tested the idea that the process of target selection required for voluntary saccades and smooth pursuit eye movements involves the same neural mechanisms. The idea that “pursuit and saccades might be viewed as different outcomes resulting from a single cascade of sensory-motor functions” is now generally accepted and has replaced the older view of distinct oculomotor subsystems. In his own laboratory, Dr. Krauzlis demonstrated that the ability to aim the eyes and maintain stable eye fixation depends on the balance of activity in the central (i.e., foveal) portion of the map of visual space contained in the midbrain superior colliculus. This “equilibrium” idea is gradually supplanting previous notions about fixation motor commands. Dr. Krauzlis identified the basic brain mechanisms responsible for the generation of microsaccades, and showed that these mechanisms are the same as those for larger saccades; it is now accepted that microsaccades and larger saccades are controlled by fundamentally the same brain circuits. Dr. Krauzlis demonstrated that the control of visual spatial attention in primates depends on the midbrain superior colliculus, and that the contribution of the superior colliculus can be dissociated from the well-known signatures of attention in the visual cortex. This initially controversial finding has led to reluctant acceptance of the idea that attention is accomplished through a combination of functions involving both cortical and subcortical brain regions, and that subcortical mechanisms through the midbrain do much more than generate the motor output. More recently, Dr. Krauzlis has pointed out the value in considering an evolutionary perspective when trying to understand how cortical and subcortical structures interact to generate high-level functions like visual attention and proposed that conserved circuits through the basal ganglia may play a central role in visual selection and attention because of their importance in reward-based learning. Since coming to NIH, Dr. Krauzlis has demonstrated that mice are capable of visual selective attention, and then exploited the tools available in this animal model to show that circuits through the basal ganglia are linked to the allocation of spatial attention. This work has started to influence thinking about the role of the basal ganglia in perceptual and cognitive functions and, conversely, the importance of reward-based learning in those high-order functions. Taking advantage of the unique collaborative environment of the Intramural Research Program at NIH, Dr. Krauzlis used a combination of fMRI and causal manipulations in monkeys to uncover a novel area in the temporal cortex that is crucial (together with frontal and parietal areas) for the cortical control of attention, and uniquely linked to subcortical attention circuits. Neuronal recordings targeting this cortical area confirm its midbrain-dependent role in selective attention, and also its involvement in event detection and object recognition. This area could be a monkey homolog to the TPJ region in humans that is implicated in spatial neglect, illustrating the importance of NHP models for understanding high-level functions of the human brain. Dr. Krauzlis’ research has revealed that advanced functions of the primate brain typically associated with the neocortex are built on top of evolutionarily older brain systems rather than developed de novo. This work highlights the importance of determining how these cortical and subcortical brain systems interact, not just to move, but also to accomplish the high-order functions that make it possible for us to learn and understand our visual world.

Dr. Krauzlis graduated summa cum laude from Princeton University with a degree in Biology in 1985 and received his Ph.D. in Neuroscience in 1991 from the University of California, San Francisco, in Steve Lisberger's laboratory. After postdoctoral training with Fred Miles and Bob Wurtz at the National Eye Institute, he was recruited to the Salk Institute in 1997, where he was promoted to Full Professor in the Systems Neurobiology Laboratory. In 2011, Dr. Krauzlis returned to the National Eye Institute as a Senior Investigator where he established the Section on Eye Movements and Visual Selection in the Laboratory of Sensorimotor Research (LSR). Dr. Krauzlis holds an Adjunct Professor position at the Salk Institute and a Joint Appointment with the National Institute on Drug Abuse (NIDA). Since 2020, he has also been Deputy or Acting Laboratory Chief of the LSR.