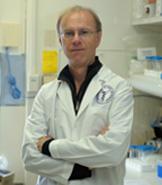 This laboratory studies G protein-coupled receptors of the immune system. These include a large family of chemokine receptors and a smaller group of classical chemoattractant receptors, which together differentially regulate specific leukocyte trafficking in support of innate and adaptive immune responses.

The goal of the lab is to delineate the precise mechanisms by which the receptors relay chemotactic signals to cells and to identify their exact physiologic roles both in immunoregulation and in immunologically mediated disease. The approaches used are to isolate specific chemoattractant receptors by molecular cloning, to examine their signal transduction properties both in model cell systems and in primary cells, and to study their biology in mouse models and, where possible, in patients through direct clinical research.

Further, the lab has a program in human immunogenomics in which genetic polymorphisms discovered in candidate chemoattractant or chemoattractant receptor genes are checked for effects on biochemical function and for associations with specific diseases. Major discoveries include the following:

There are projects ongoing in the lab extending each of these observations.

He began his research career as a medical staff fellow in the Bacterial Diseases Section of the NIAID Laboratory of Clinical Investigation in 1986 and was promoted to senior investigator with tenure in the Laboratory of Host Defenses (LHD) in 1992. In 1998, he was promoted to the Senior Biomedical Research Service and named chief of the LHD Molecular Signaling Section.