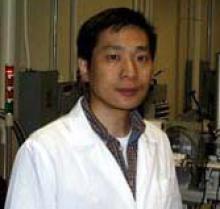 Structure and ligand recognition of NK-cell receptors
Natural killer (NK) cells constitute an important branch of host innate immunity against tumor and viral infection. The activation of NK cells is controlled by the balance of activating and inhibitory receptors, To understand the molecular mechanism of NK-cell target recognition, we have carried out structural studies on a number of activating and inhibitory NK-cell receptors. As examples of the activating receptors, we determined the crystal structures of NKG2D in complex with its ligand ULBP3 and of a natural cytotoxicity receptor (NCR) NKp46. To gain functional insights into the inhibitory NK receptors, we determined the crystal structures of human CD94, KIRDL2 and its complex with a class I MHC ligand, HLA-Cw3. Through these structural works, from both our lab and others', we learned how NK cells recognize their ligands. We continue our structural studies on the natural cytotoxicity receptors and their ligand identification.

Structural mechanism of HIV-1 and host interactions
HIV type 1 (HIV-1) infects macrophages efficiently despite relatively low levels of cell-surface CD4 expression. Additional attachment factors on host cells have been suggested to facilitate the viral entry. We have studied HIV-1 envelope gp120 interaction with host carbohydrate receptors, such as DC-SIGN, in the past few years. While DC-SIGN binds gp120 with high affinity, it does not appear to facilitate the viral entry. Instead, our preliminary results showed that HIV-1 gp120 recognized, both in solution and on cell surface, a new family of myeloid-lineage carbohydrate receptors, the Sialic acid-binding immunoglobulin-like lectins (Siglec) through envelope-associated sialic acids. We are currently investigating the functional relevance of gp120-Siglec recognition, whether HIV-1 uses Siglecs to facilitate its host entry, and the potential importance of envelope carbohydrates in HIV infection and pathogenesis.

HIV-1 encodes an accessory protein, vpu, to facilitate the maturation and efficient host cell release of viral particles. Recently, CD317 has been identified as a host target of vpu and renamed tetherin, for its ability to retain HIV-1 viral particles on transfected cells. The gene for tetherin, also known as bone marrow stromal antigen 2 (BST2), encodes a 180-amino acid type II transmembrane protein with a predicted GPI-anchor at the c-terminus. Evidence suggests that tetherin induces the internalization of nascent virus to endocytic compartments, thus inhibiting their release, and the expression of vpu promotes the intracellular degradation of tetherin.

While this recent work provides significant insight into vpu and tetherin interactions and their role in viral release, the mechanism of tetherin-mediated viral retention as seen in vpu infection remains unclear. In particular, what is the viral target of tetherin and how does tetherin interact with HIV-1 and inhibit virus release? To address these questions, we propose to investigate the structure and function of tetherin by X-ray crystallography and identify its HIV-1 viral ligands using solution and cell surface binding approaches. These studies will not only advance our understanding of HIV-1 biology and viral pathogenesis but also facilitate the design of potential novel tetherin mimics to help sequester and clear the virus from infected individuals.

Fc receptor recognition by immunoglobulins and pentraxins
Pentraxins are a family of ancient innate immune mediators conserved throughout evolution. The classical pentraxins include serum amyloid P component (SAP) and C-reactive protein (CRP), which are parts of acute-phase proteins synthesized in response to infection. Both recognize microbial pathogens and activate the classical complement pathway through C1q. More recently, members of the pentraxin family were found to interact with cell surface Fcγ receptors (FcγR) and activate leukocyte-mediated phagocytosis 5-8. We now describe the structural mechanism for pentraxin binding to FcγR and its functional activation of FcγR-mediated phagocytosis and cytokine secretion. The complex structure between human SAP and FcγRIIa reveals a diagonally bound receptor on each SAP pentamer with both D1 and D2 domains of the receptor contacting the ridge helices from two SAP subunits. The 1:1 stoichiometry between SAP and FcγRIIa infers the requirement for multivalent pathogen binding for receptor aggregation. Mutational and binding studies show that pentraxins are diverse in their binding specificity to FcγR isoforms but conserved in their recognition structure. The shared binding site for SAP and IgG results in competition for FcγR binding and the inhibition of immune complex-mediated phagocytosis by soluble pentraxins. These results establish the antibody-like functions for pentraxins in the FcγR pathway, suggest an evolutionary overlap between the innate and adaptive immune systems, and have novel therapeutic implications for autoimmune diseases.

Dr. Sun obtained his Ph.D. from the Molecular Biology Institute, University of Oregon, for the study of structure and thermostability of phage T4 lysozyme using X-ray crystallography. He then joined the National Institute of Diabetes and Digestive and Kidney DIseases for his postdoctoral training in 1991, focusing on the structure and function of cytokines. In particular, he determined the crystal structure of a human transforming growth factor, TGF-beta 2. He joined NIAID in 1994.