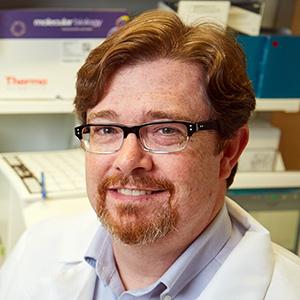 Immune System Activation and End-Organ Mitochondrial Metabolism
The focus of the group's research on immune system activation and end-organ metabolism is based on the clinical observation that infection is a major cause of metabolic decompensation and associated morbidity and mortality in patients with mitochondrial disease. The MINIS uses animal models, combined with infectious organisms or immune activators, to yield insights into the metabolic perturbations seen in disorders of mitochondrial metabolism and to identify potential targets for intervention. Metabolic perturbations are demonstrated using metabolomics, mRNA profiling, proteomics, enzymology and in vivo metabolic imaging with MR spectroscopy.

Dr. Peter McGuire received his bachelor's in psychology from Villanova University, a master's in microbiology and immunology from New York Medical College, and an M.B.B.Ch. (with honors, and equivalent with an M.D.) from the Royal College of Surgeons in Ireland. After completing a combined residency in pediatrics and medical genetics at Mount Sinai Medical Center, he was awarded a fellowship in biochemical genetics from the American College of Medical Genetics and Genzyme. After completing his training, he remained as a junior faculty member in the Program for Inherited Metabolic Diseases at Mount Sinai. Dr. McGuire is board certified in Pediatrics, Clinical Genetics and Biochemical Genetics.

In 2010, Dr. McGuire moved to the National Institutes of Health (NIH) to join the Physician Scientist Development Program to accelerate his translational research program. He was appointed to the position of tenure track Investigator in 2016. Throughout his career, Dr. McGuire has been focused on improving the care of patients with disorders of mitochondrial metabolism. By combining his training in immunology and biochemical genetics, he fashioned a translational research program to understand the interplay between mitochondrial metabolism and the immune system.

His NIH Clinical Center protocols, the NIH MINI Study, is the first organized effort to study immune function in patients with disorders of mitochondrial metabolism, which aims to demonstrate that these patients can be informative regarding the role of mitochondria in immune cell function.

This page was last updated on September 28th, 2021