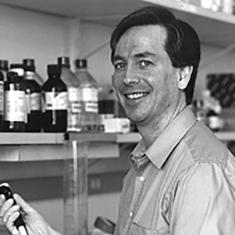 A large number of hematologic malignancies are associated with non-random, recurrent chromosomal translocations. These translocations typically either activate latent proto-oncogenes or create novel fusion genes. Our approach to studying leukemia in general is as follows:

In the late 1970s and early 1980s, it was discovered that antibody, and T-cell receptor, diversity was accomplished, in large part, by physical reconfiguration of genomic DNA. Discrete segments coding for variable (V), diversity (D), and joining (J) segments of an immunoglobulin or T cell receptor were recombined in an enzymatic process catalyzed by a multiprotein complex known as the VDJ recombinase. Working as a postdoctoral fellow in the lab of Dr. Ilan "Lanny" Kirsch, I discovered that the VDJ recombinase complex could, on rare occasions, act on non-antigen receptors, and termed this form of recombination "illegitimate" VDJ recombination. We further showed that this illegitimate recombination, first identified for the SIL and SCL genes, could activate proto-oncogenes. Subsequently, this type of illegitimate recombination has been shown to be involved in at least six different forms of recurrent, oncogenic events. At least one of these events (the SIL-SCL fusion) is used clinically to track minimal residual disease in T cell leukemia patients.

Next generation short read sequencing studies generated an explosion of sequence data beginning in the mid 2000s. Scientists uncovered innumerable structural variations (SVs) where the genomic sequence of a sample diverged from the reference sequence; these SVs were often assumed to represent rearrangements of the genome, including inversions and translocations. As the lead PI for this study, my lab showed that DNA double strand breaks (DSB) can be repaired by insertion of 50-1000 bp sequences derived from distant regions of the genome, termed templated- sequence insertions (TSIs), to distinguish them from the non-templated nucleotide additions that are commonly associated with non-homologous end joining (NHEJ). Additional experiments indicate that the source of template for repair was primarily nuclear RNA. This mode of DNA-DSB repair by insertion is not restricted to experimentally produced breaks, but also occurs at the site of spontaneous DNA-DSBs in human cells. These TSIs are polymorphic in the human genome, indicating that some templated-sequence insertion polymorphisms (TSIPs) occur in germ cells or early-stage embryos. Recognition of these TSIs is important in interpreting structural variations in short read sequencing studies, and provides additional polymorphic markers for population and evolution studies. This error- prone form of DNA repair may play a role in genetic diseases, as well as fundamental evolutionary processes, such as exon shuffling.

Recurrent chromosomal translocations, involving a large number of genes, have been shown to be critical events for many forms of leukemia. The presence of particular translocations (for instance, BCR-ABL1 or PML-RARA) is the single most important variable used in stratifying certain leukemia patients for prognostic and therapeutic purposes. In the late 1990s, NUP98 was first noticed to be involved in a t(7;11) chromosomal translocation. Subsequently, as lead or collaborating PI, my lab was the first to clone and sequence five additional NUP98 translocations, including NUP98- HOXD13, NUP98-TOP1, NUP98-LEDGF, NUP98-NSD1, and NUP98-RAP1GDS. Subsequent studies have shown that many of these fusions are oncogenic in mice, often in collaboration with Nras, Kras, or Cbl activation events. Leukemic cell lines driven by NUP98-PHF23 or NUP98-JARID1A fusions, both of which bind trimethylated histone H3 residues at lysine 4 (H3K4Me3) within the HOXA cluster, have recently been shown to be exquisitely sensitive to disruption of this binding; nearly 100% of the cells are dead within 24 hrs of treatment. This raises the possibility that this form of epigenetic therapy may be clinically useful in the near future.

Generation of the NUP98-HOXD13 (NHD13) Model for Myelodysplastic Syndrome

The myelodysplastic syndromes (MDS) are a collection of hematopoietic stem cell disorders characterized by ineffective hematopoiesis, dysplasia, and transformation to AML. The disease has been difficult to model in vivo, as primary MDS cells grow very poorly in immune-deficient mice, and, until recently, there were no good genetically engineered models for MDS. In 2005, as lead PI, my lab reported the generation of a highly penetrant model for MDS using a NUP98- HOXD13 transgene. These mice faithfully recapitulate the cytopenias, ineffective hematopoiesis, dysplasia, and transformation to AML recognized in the human disease. We have shared these mice with dozens of academic labs, and licensed them to pharmaceutical companies. Use of these mice as a pre-clinical platform was instrumental in evaluation of an agent (ACE-536) currently in phase II clinical trials for the treatment of MDS-associated anemia.

Cancer has been linked to chronic inflammation for well over 100 years. Peripheral T cell lymphoma, not otherwise specified (PTCL-NOS) is an inflammatory, clonal malignancy of activated T cells, which secrete cytokines that attract B cells and plasma cells, and lead to an inflammatory response. As the lead PI, our lab showed that overexpression of Lin28b in T cells leads directly to decreased expression of the let-7 family of tumor suppressor microRNAs, increased circulating activated T cells, chronic inflammation, and PTCL-NOS. In addition, we noted that LIN 28B, or the closely related LIN28A, was overexpressed in a majority of patients with PTCL-NOS. This study demonstrates in vivo evidence for a mechanism linking inflammation to cancer, identifies a previously unsuspected link between Lin 28b and PTCL- NOS, and provides a unique animal model that can be used for the study of PTCL-NOS biology and therapy.

Dr. Aplan received a B.S. in biophysics (1979) and an M.D. (1983) from Pennsylvania State University in 1983. From 1983 to 1987, he trained in pediatrics and was chief resident at the Children's Hospital of Buffalo. He received fellowship training in pediatric hematology/oncology at the NCI from 1987 to 1992 and served as assistant, then associate, professor of pediatrics and microbiology and immunology at Roswell Park Cancer Institute from 1992 to 1999. He moved to the NCI in 1999 where he is an investigator in the Genetics Branch.