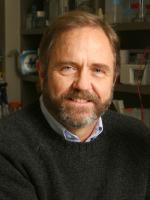 The major research focus of my laboratory is the regulation of gene expression by the post-transcriptional modification of mRNA stability and translation. Gene expression in response to external, including environmental, stimuli, reflects a dynamic balance between mRNA synthesis and decay, and we focus on the regulation of the mRNA degradation step. Most of our work involves a family of CCCH tandem zinc finger proteins known as the tristetraprolin (TTP) family. Members of this family are expressed in organisms ranging from plants to man, and are involved in a variety of physiological processes in eukaryotes.

We initially cloned the prototype of this family, TTP, in a screen for insulin-induced genes. This protein is an RNA binding protein that contains a central tandem CCCH zinc finger domain. It uses this zinc finger domain to bind to a specific type of AU-rich sequence in its RNA targets, and then promotes RNA decay by stimulating the removal of the polyA tail. This mechanism is thought to pertain to all the family members from man to plants. The biochemical mechanisms of this stimulated deadenylation, and its sites of regulation, are among our main lines of ongoing research.

The first discovered and physiologically most important TTP target in mice is the mRNA encoding tumor necrosis factor alpha (TNF). We discovered this by knocking out the gene encoding TTP, which resulted in a systemic inflammatory syndrome driven by excess TNF. We eventually showed that TTP bound directly to the 3'-untranslated region of this mRNA, and that this binding led to accelerated decay of the mRNA. Conversely, the absence of TTP led to abnormal slowing of the TNF mRNA decay rate, its abnormal accumulation, and the abnormal accumulation of synthesized TNF protein. This novel mechanism for regulating TNF synthesis and secretion is a potential target for both new drug development, and for discoveries concerning the effects of environmental influences on the innate immune system. Studies are underway in both these areas; specifically, we are screening libraries of chemical compounds for potential drugs that increase TTP biosynthesis in the absence of TNF secretion, and investigating human populations for TTP sequence abnormalities that might predispose them to inflammatory diseases. We are also continuing to work on the identification of other TTP target transcripts and how they relate to the physiology of the intact organism.

We are also studying the other three mammalian TTP family members, and by doing so have determined that they are involved, respectively, in early formation of the umbilical circulation; hematopoietic stem cell and ovarian development; and placental physiology. In each case, the identities of physiological mRNA targets for these proteins are topics of active investigation.

Finally, to improve our understanding of the fundamental mechanisms underpinning this unusual method of regulating gene expression, we have extended our studies into other model organisms, including benign and pathogenic yeasts. We are also investigating the mechanisms of regulation of TTP family member proteins using purely in vitro assay systems as well as the tools of structural biology.

Dr. Blackshear obtained his DPhil degree in biochemistry from the University of Oxford in 1974, and his MD from Harvard Medical School in 1977. He did his internship and residency in internal medicine, and fellowship in endocrinology, at the Massachusetts General Hospital and Harvard Medical School, and remained there as an Assistant Professor of Medicine. In 1984, he moved to Duke University, where he was an Investigator of the Howard Hughes Medical Institute and, ultimately, Professor of Medicine and of Biochemistry. He moved to the NIEHS as Clinical Director and Senior Investigator in 1997, and became acting Scientific Director in 2007. He is currently a Senior Investigator in the Signal Transduction Laboratory, NIEHS.