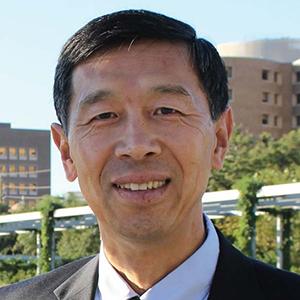 Dr. Liu's laboratory investigates the molecular mechanisms of leukemia, with the long-term goal of translating research findings to improved clinical practices, including better diagnosis and treatment of leukemia and related hematological diseases. A group of diseases that strikes approximately 43,000 Americans each year, leukemias are frequently associated with chromosome abnormalities such as translocations, inversions and deletions. Two genes, CBFB and RUNX1, which encode proteins (CBFb and RUNX1, respectively) that form a dimer for DNA binding and gene expression regulation, are frequent targets of such chromosome abnormalities. Most of Dr. Liu's work focuses on these two genes and the core binding factor (CBF) leukemia, a subset of leukemia caused by chromosome abnormalities in these two genes. In addition, Dr. Liu has a natural history study at the NIH Clinical Center for patients with inherited RUNX1 mutations.

The zebrafish is a useful model for studying embryonic development and is easily amenable to large-scale genetic studies. Dr. Liu's group, with the help of the NHGRI Zebrafish Core, headed by Dr. Raman Sood, has used zebrafish to study the roles of several transcription factor genes in hematopoiesis, such as runx1, cbfb, and gata1 (Blake et al., Blood 2000; Lyons et al., PNAS 2002, and Sood et al., Blood 2010). Using a positional cloning/candidate gene approach, they identified a non-sense mutation in gata1 as the cause for a zebrafish mutant with a "bloodless" phenotype (Lyons et al., PNAS2002). As the first gata1 mutation identified in the zebrafish, this finding demonstrated significant functional conservation between mammalian and zebrafish hematopoiesis. Using a high-throughput reverse genetic screening system they generated a fish line carrying a truncation mutation in runx1, which led to discoveries of novel functions of the gene during hematopoiesis (Sood et al., Blood 2010). Dr. Liu's group also generated fish lines with novel mutations in gata1, which uncovered differential roles of gata1 between primitive and definitive stages of hematopoiesis (Belele et al., Blood 2009). More recently Dr. Liu's lab has generated fish lines with null mutations in cbfb and made novel findings regarding its role in hematopoietic stem cell production (Bresciani, Blood in press). Overall the zebrafish has proven to be an excellent model for dissecting the genetic control of early hematopoiesis, especially the formation of hematopoietic stem cells, from fresh angles and in great detail.

Germline mutations in RUNX1 cause familial platelet disorder with associated myeloid malignancies (FPDMM, or simply FPD), an autosomal dominant disease. Patients with this disorder have defective megakaryocytic development, low platelet counts, and defective platelet functions. FPDMM patients have a life-long risk of hematopoietic malignancies, with variable clinical presentation and disease penetrance among families with different germline mutations, and even between affected individuals within a single family. Currently there are no good biomarkers or easy assays to predict disease outcome, and there have been no systematic studies of FPD as a disease. To tackle these problem, we launched a RUNX1 longitudinal natural history study at the NIH Clinical Center in early 2019.

The purpose of this study is to conduct dedicated, systematic, and long-term clinical research of patients with germline RUNX1 mutations in order to achieve better understanding of the disease progression and underlying mechanisms, which will lead to better clinical management and hopefully develop new therapies. Those interested in the study may contact us at fpd.clinic@nih.gov.

Dr. Liu received his medical degree and residency training in internal medicine in Beijing, China. He then earned his Ph.D. in human genetics from the University of Texas M.D. Anderson Cancer Center in Houston. He received his postdoctoral research training at the University of Michigan before moving in 1993 to NIH's National Center for Human Genome Research, renamed the National Human Genome Research Institute (NHGRI) in 1995.

He has remained at NHGRI - appointed initially as a senior staff fellow, then as a tenure track investigator and since 2001 as a tenured senior investigator. Dr. Liu has been the head of the Oncogenesis and Development Section in NHGRI since 1995. In May 2011, Dr. Liu was appointed as the deputy scientific director of NHGRI. The main focus of Dr. Liu's research over the years has been the mechanism of leukemia development at the molecular level, using genetic and genomic approaches.

Dr. Liu discovered that a CBFB-MYH11 fusion gene is the product of chromosome 16 inversion, a common chromosome abnormality in human acute myeloid leukemia. Using animal models, Dr. Liu has illustrated the importance of CBFB-MYH11 for leukemia development, and how this fusion gene works. His group has also made important discoveries regarding the normal functions of several important leukemia genes.

More recently, Dr. Liu's lab has focused on developing targeted treatments for leukemia. Dr. Liu has received several honors for his achievements, including NIH Director's Award and elections to the American Society for Clinical Investigation and the Association of American Physicians.