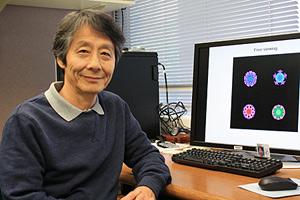 The goal of our research is to understand the neuronal mechanisms of voluntary behavior. Our everyday behavior is controlled in various ways. A particular behavior may be evoked reflexively by external events. It may be guided by recent or old emotional experiences. It may be chosen deliberately out of many alternatives. It may be executed automatically and subconsciously, yet leading to beneficial outcomes. None of them can be done without the brain. This means that the brain has various mechanisms for controlling behavior. In fact, the brain is composed of many areas that seem to function differently. It is thus crucial to understand how these brain areas interact with each other. How do emotional experiences affect particular body movements, such as eye movements? Why do we look and choose particular objects out of many other objects? Where in the brain are these functions accomplished, and how? We may choose particular objects deliberately or automatically? Are the deliberate and automatic choices controlled by different brain mechanisms? Do they work independently? If so, how is the final choice made? One of our research projects is focused on the functions of the basal ganglia which seem to be involved in most of the above functions. Indeed, dysfunctions of the basal ganglia lead to various kinds of behavioral disorders which affect body movements, motivation, emotion, cognitive functions, goal-directed behavior, skill, and/or habit. We also study other brain areas that are connected with the basal ganglia: the cerebral cortical areas that provide the basal ganglia with sensorimotor-emotional signals; neuromodulatory systems (e.g., dopamine, serotonin), which may modulate the sensorimotor-emotional signals in the basal ganglia; and limbic systems (e.g., habenula), which may guide the neuromodulatory systems. We address these questions using behavioral, electrophysiological, and pharmacological methods.

Dr. Hikosaka received his M.D. and Ph.D. from University of Tokyo where he worked in the laboratory of Hiroshi Shimazu on the brainstem vestibulo-oculomotor system. He did postdoctoral research with Robert Wurtz at the Laboratory of Sensorimotor Research, NEI on the role of the substantia nigra pars reticulata in the control of saccadic eye movements. He became Assistant Professor at Toho University School of Medicine (Tokyo) in 1979, Full Professor at National Institute of Physiological Sciences (Okazaki) in 1988, and Full Professor at Juntendo University School of Medicine (Tokyo) in 1993. In 2002, he returned to the Laboratory of Sensorimotor Research, NEI as a Senior Investigator and Chief of the Section of Neuronal Networks. He was elected to the American Academy of Arts & Sciences in 2011. His main interest is the neural mechanisms of voluntary behavior. His laboratory studies the mechanisms of motivation, learning, skill, decision-making, attention, and oculomotor control.