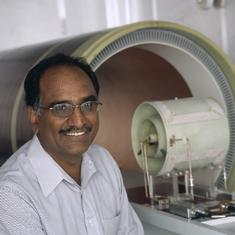 Characterizing tumors and related pathological conditions on a physiologic basis by noninvasive radiological techniques is a potentially useful capability for diagnosis as well as for devising appropriate cancer treatment approaches. Magnetic resonance imaging (MRI) is a commonly used clinical imaging procedure that provides images of soft tissue anatomy with excellent detail. Recent advances have made it possible to provide functional information such as brain function using functional MRI (fMRI) techniques. To obtain physiological information such as oxygen or tissue redox stats in pathological situations such as solid tumors or ischemic/hypoxic tissue, quantitatively and noninvasively, we are developing imaging techniques based on electron paramagnetic resonance (EPR). EPR is similar to nuclear magnetic resonance (NMR) in many ways. NMR probes nuclei such as 1H, 13C, and 31P, while EPR detects paramagnetic species. Paramagnetic species by definition contain unpaired orbital electrons. Examples of paramagnetic species are free radicals and transition metal complexes such as iron and copper. While EPR spectroscopy is used to detect metal complexes and free radicals for medical imaging applications, stable free radicals with simple EPR spectra are desirable. Examples of free radicals, which can be used at nontoxic levels for in vivo imaging, are nitroxides and trityl radicals. These species have simple EPR spectra and have long in vivo pharmacological half-lives. The intrinsic EPR spectral property of the free radical, such as the spectral bandwidth (full width of the absorption band at half maximum) is directly related to oxygen concentration. Imaging modalities, which can map the spatial distribution of the free radical concentration and extract the spectral information on a pixel-by-pixel basis, will therefore provide oxygen maps of the object being imaged. Based on this theme, we have developed instrumentation for in vivo detection and imaging of free radical contrast agents that can be detected and imaged in experimental animals such as mice and rats.

Three separate imaging configurations for the detection and imaging of free radicals are being developed and evaluated for medical noninvasive imaging applications:

We are assessing these three techniques as potential functional imaging modalities, which can be hopefully used in humans to provide important physiologic information.

Dr. Krishna obtained his Ph.D. in physics from the Indian Institute of Technology, Madras, India, in 1984 and joined the NCI the same year. He became an independent investigator in 1993. His research interests include studies of free radical processes in causing oxidative injury and antioxidant defense. More recently, he has been involved in developing functional imaging tools to study tumor physiology