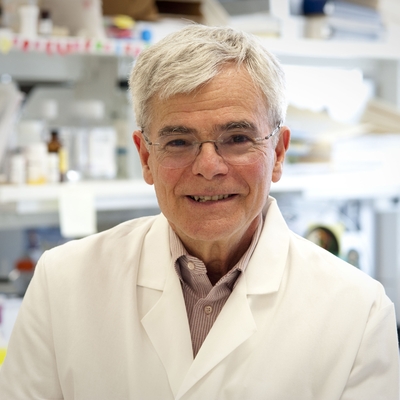 Success in treatment of some disseminated cancers with chemotherapy has led to intensified efforts to understand why many other cancers are intrinsically resistant to anticancer drugs or become resistant to chemotherapy after many rounds of treatment. Work in the Multidrug Resistance Section has revealed that a major mechanism of resistance of cancer cells to natural product anticancer drugs such as Adriamycin, etoposide, vinblastine, actinomycin D, and Taxol is expression of an energy-dependent drug efflux pump, termed P-glycoprotein (P-gp, encoded by the ABCB1 gene), or the multidrug transporter. This pump system contributes to drug resistance in about 50 percent of human cancers by preventing accumulation of powerful anticancer drugs in cancer cells. The sequence of the ABCB1 gene, determined in our laboratory, has led to (1) a model of the transporter as a pump with 12 transmembrane domains and two ATP sites, and (2) the discovery of a related family of 48 human ABC transporters involved in a variety of essential transport processes in cells. Polymorphisms in the ABCB1 gene, including the "silent" polymorphism C3435T (no amino acid change) affect drug resistance and sensitivity to inhibitors, probably by changing mRNA structure and the rate of translation. At least a dozen other ABC transporters may contribute to drug resistance in cancer. While the studies on the mechanism and function of P-gp and related ABC transporters in cultured cancer cells has led to a better understanding of possible mechanisms of multidrug resistance and novel ways to circumvent or target resistance such as the super-sensitivity of P-gp-expressing cells to some drugs, clinical relevance is still unclear.

One of the recognized roles for ABC transporters, especially P-gp and ABCG2, is that of limiting drug penetration into the brain. While knockout mouse models have been invaluable in defining the role of P-gp and ABCG2 at the blood-brain barrier, these models are expensive and not amenable to high-throughput assays. The zebrafish has been suggested as a possible alternative to the mouse model; however, little data are available with regard to homologous transporters. Zebrafish do not have a direct homolog of ABCB1 but instead have 2 similar genes, abcb4 and abcb5. In addition, zebrafish have 4 homologs of human ABCG2—abcg2a, abcg2b, abcg2c, and abcg2d. We are currently localizing these transporters in the zebrafish and characterizing their substrate specificity to determine the feasibility of the zebrafish as a model for transporters at the human blood-brain barrier. Additionally, we are developing novel zebrafish-based reporter assays to model transporter inhibition at the blood-brain barrier.

While overexpression of ABCB1, ABCC1 or ABCG2 is known to confer a multidrug resistance phenotype, other ABC transporters may also contribute to drug resistance in cancer. We are therefore developing a CRISPR-based system to examine the role of all 48 ABC transporters in the development of resistance to a given chemotherapy. This system can be used with any cell line model of choice and with any cytostatic or cytotoxic compound.

Dr. Gottesman obtained his M.D. from Harvard University Medical School, completed his internship and residency in medicine at the Peter Bent Brigham Hospital in Boston, and received his postdoctoral research training in molecular genetics with Martin Gellert at the NIH. After a year as an assistant professor in the Department of Anatomy at Harvard, he moved to the NIH in 1976. He currently serves as the NIH deputy director for intramural research as well as chief of the Laboratory of Cell Biology.