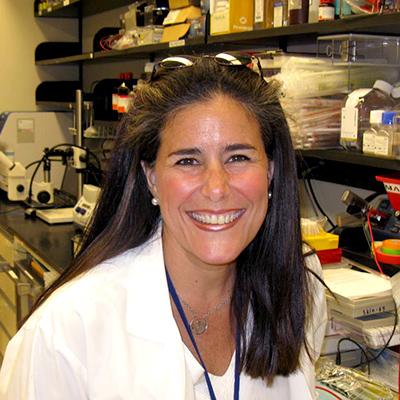 The pathways that regulate stratified epidermis differentiation and the formation of a functional skin barrier have been a central topic of investigation in epidermis biology. Transcription is one of the most important regulatory mechanisms controlling the stepwise program of epidermal differentiation. Our research efforts have focused on characterizing the regulation and function of Distal-less 3 (Dlx3) homeobox transcription factor, a member of the murine Dlx family. Dlx homedomain proteins are a family of transcription factors that play crucial roles in developmental processes and differentiation of individual tissues. The Dlx3 protein is a transcriptional activator with an AT-rich DNA binding site and is expressed in the differentiated layers of the epidermis, ectodermal appendages and bone. Our lab studies epidermal differentiation, skin barrier formation and associated-inflammatory responses

Ectodermal dysplasias are a group of heritable pathological disorders that results from anomalies in epithelial/mesenchymal-derived organs/appendages formation. DLX3 is among the few genes for which mutations have been directly linked with ectodermal dysplasias. The importance of Dlx3 in the patterning and development of ectodermal structures is corroborated by the effects of Dlx3 mutations in patients with autosomal dominant Tricho-Dento-Osseous (TDO) syndrome. Recent research on the mechanistic role of Dlx3 in epidermal development and appendage formation showed that Dlx3 is a direct target of p63, and demonstrated that misregulation of Dlx3 is directly involved in the pathogenesis of ectodermal human syndromes that are associated with p63 mutations. We further demonstrated that Dlx3 induces phosphorylation-dependent p63 degradation and that a mutant Dlx3 protein is unable to promote p63 degradation, which, in turn, results in impaired expression of cell cycle regulatory proteins and skin differentiation markers. Other results imply genetic heterozygosity at the Dlx3 locus exists and may protect TDO patients from developing severe p63-associated skin defects.

To elucidate the functional role of the Dlx3 homedomain protein during early development and during epidermal differentiation, we have determined several of Dlx3's target genes. For the comprehensive analysis of Dlx3 gene expression throughout development, we generated a knock-in mouse carrying the reporter gene beta-galactosidase (LacZ), under the control of the endogenous Dlx3 promoter to show the temporal and spatial expression of Dlx3 in various tissues and organs, including hair, teeth and bone. Targeted deletion of Dlx3 results in embryonic development arrest around day 9.5-10 and is associated with a gross failure of the placenta to undergo proper morphogenesis.

In addition, we have determined that selective Dlx3 ablation in epidermis results in complete alopecia, owing to failure of the hair shaft and inner root sheath to form. Significantly, we elucidated the regulatory cascade that positions Dlx3 downstream of Wnt signaling and as an upstream regulator of other transcription factors regulating hair follicle differentiation such as Hoxc13 and Gata3. Overall, our studies showed that Dlx3 is also essential for hair morphogenesis, differentiation and cycling programs.

Our research goals for this project are:

Using various animal models, we have shown that transgenic temporal and spatial mis-expression of Dlx3 in the pre-differentiated basal layer caused an abnormal skin phenotype, characterized by cessation of proliferation and premature differentiation of the basal cells. Our recent studies have demonstrated that epidermal deletion of Dlx3 homeodomain transcription factor leads to disruption of the barrier formation and is linked to the development of an inflammatory response; characterized by the accumulation of IL-17-producing CD4+ T, CD8+ T and gamma-delta T cells in the skin and lymph nodes. The gene expression of this conditional mouse model shared features with lesional psoriatic skin, and Dlx3 expression was markedly and selectively decreased in psoriatic skin.

Our current research goals are:

Maria I. Morasso received her PhD from the Venezuelan Institute of Scientific Investigations (IVIC), Venezuela. Dr. Morasso started at the NIH as a post-doctoral fellow in the Laboratory of Molecular Genetics in NICHD. In May 2000, she became a tenure-track investigator and headed the Developmental Skin Biology Unit. Since May 2008, Dr. Morasso is the Chief of the Developmental Skin Biology Section and the Laboratory of Skin Biology. She also serves as an adjunct investigator in the Center for Cancer Research, NCI.