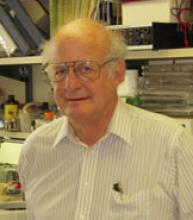 The Viral Pathogenesis and Vaccine Section (VPVS) develops and uses SIV and SIV/HIV chimeric viruses (SHIVs) as surrogates of HIV-1 to investigate virus-induced immunopathogenesis and to develop effective prophylactic vaccines in nonhuman primate models. Toward this end, we have constructed X4- and R5-tropic SHIVs that durably infect macaques and cause systemic depletion of CD4+ T cells in rhesus monkeys, resulting in clinical disease. Recent work has focused on 1) recombination-mediated changes in co-receptor utilization that confer an augmented pathogenic phenotype and 2) the development of cross-reacting neutralizing antibodies directed against the HIV-1 envelope glycoproteins in animals inoculated with the R5-tropic SHIVAD8.

Intermolecular recombination between HIV‑1 strains circulating in an infected individual is now recognized to be a major mechanism involved in the emergence of drug-resistant and immunological escape variants. HIV‑1 recombination has been studied in vivo by inoculating individual rhesus macaques with X4- and R5-tropic SHIVs. In one of the infected monkeys, both SHIVs were potently suppressed by week 12 post-inoculation, but a burst of viremia at week 51 was accompanied by an unrelenting loss of total CD4+ T cells and the development of clinical disease (Fig. 1A). PCR analyses of plasma viral RNA indicated an env gene segment, containing the V3 region from the inoculated X4 SHIV, had been transferred into the genetic background of the input R5 SHIV by intergenomic recombination, creating an X4 virus with novel replicative, serological, and pathogenic properties (Fig. 1B). These results indicate that the effects of retrovirus recombination in vivo can be functionally profound and may even occur when one of the recombination participants is undetectable in the circulation as cell-free virus.

Timeline of recombination events occurring in a rhesus monkey following the inoculation of X4 and R5 SHIVs.

Figure 1B
Figure 1: Timeline of recombination events occurring in a rhesus monkey following the inoculation of X4 and R5 SHIVs. A. Levels of plasma viral RNA and CD4+ T cells in the dually infected animal. B. Composition of envelope genes in the plasma virus(es) present following infection.

An R5-tropic SHIV that causes gradual losses of both memory and naïve CD4+ T lymphocytes, generates anti-viral CD4+ and CD8+ T-cell responses, and generates sustained chronic immune activation while maintaining variable levels of plasma viremia (102 to 105 RNA copies/ml for up to three years post-innoculation) and death from immunodeficiency has been generated (Fig 2).

Figure 2: The levels of plasma viremia (a) and absolute numbers of peripheral CD4+ T lymphocytes (b) in rhesus macaques inoculated intravenously with the R5-tropic SHIVAD8.

SHIVs express the HIV envelope glycoprotein and can therefore be used to evaluate HIV-1 Env specific neutralizing antibody (NAb) responses. Developing an SHIV that is capable of eliciting broad and potent NAb responses and tracking the evolution of this immune response might provide unprecedented insight into the factors associated with the development of bNAbs. Plasma from 14 R5-tropic SHIV-infected macaques was therefore screened for the presence of high-titered broadly reacting neutralizing activity, and a single macaque (Rh CE8J) with potent cross-clade plasma NAb response was identified (Fig. 3). Neutralization assays were carried out using samples taken at serial time points and indicated that the development of broad plasma neutralization was unusually rapid and coincided with the development of autologous NAbs. Furthermore, serum mapping studies suggested that the bNAbs interact with carbohydrates and are critically dependent on the N332 glycan (Fig. 4).

Dr. Martin received an M.D. from Yale University School of Medicine in 1962 and, following two years of clinical training in internal medicine at the University of Rochester, joined NIH as a research associate. He initially investigated the replication and gene regulation of SV40 and polyomaviruses and subsequently studied endogenous murine and human retroviral sequences. Since 1984, his research program has focused on HIV. Dr. Martin was appointed chief of the Laboratory of Molecular Microbiology when it was established in 1981. He is a member of the National Academy of Sciences and the recipient of numerous scientific awards.