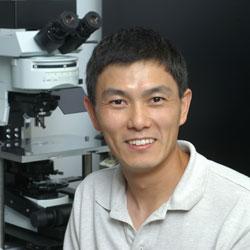 Exocytosis and endocytosis are two fundamental cellular processes in nearly all cells, including neurons. They underlie many important functions, such as intracellular trafficking, nutrient uptake, viral infection, hormone secretion, blood glucose regulation, and synaptic transmission that is essential for our brain functions. We aim at understanding vesicle exo- and endocytosis with respect to their dynamic structural changes, molecular mechanisms, and functions at the sub-vesicle resolution at millisecond time scale. We study the structural changes and molecular mechanisms that mediate fusion between two bilayer membranes, that open a fusion pore, that expand a fusion pore, that constrict a fusion or fission pore, that close a fusion or fission pore and that generate a membrane curvature. We study how these structural changes control release of vesicular contents and recycling of vesicles. We used a variety of advanced techniques, including confocal imaging, super-resolution STED imaging, super-resolution STORM imaging, molecular biological techniques, electron microscopy, and advanced electrophysiological techniques (e.g., whole-cell current and capacitance recordings, cell-attached single channel current and capacitance recordings). We used three preparations, the giant calyx of Held nerve terminal, the cultured hippocampal synapse and the neuroendocrine adrenal chromaffin cell.

Dr. Wu received his M.D. in 1985 from Second Military Medical College, Shanghai, and his Ph.D. in neuroscience in 1994 from Baylor College of Medicine in Houston, where he worked with Peter Saggau studying how calcium channels control transmitter release. From 1994 to 1996, he was a postdoc in professor William Betz's lab at Univ. Colorado Medical School, where he studied how vesicle endocytosis is regulated. From 1996 to 1999, he was a postdoc in Bert Sakmann's lab at the Max Planck Institute in Heidelberg, Germany, where he studied release mechanisms and short-term synaptic plasticity. From 1999 to 2003 he was an assistant professor at Washington University in St. Louis. Dr. Wu joined NINDS as an investigator in 2003 and was promoted to senior investigator in 2007. His laboratory investigates the fundamental process of exocytosis and endocytosis, such ashow the fusion pore opens, expands, constricts, or close, how membrane curvature is generated, how endocytosis is initiated and mediated, how synaptic transmission is controlled by different modes of exocytosis, endocytosis and by calcium channels at nerve terminals and neuroendocrine cells.

This page was last updated on September 26th, 2018