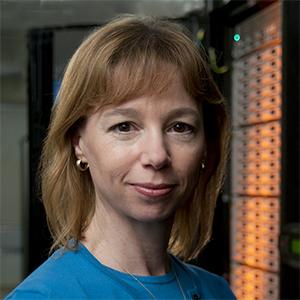 The completion of the Human Genome Project was a pivotal step toward comprehensive annotation of genomic content, and opened the door for intensive studies of elusive functional elements. With a goal of identifying and characterizing noncoding regulatory elements involved in disease, Dr. Elnitski has been a member of the ENCODE Consortium since 2003, when it was initiated to catalog the content of regulatory regions of the human genome (see ENCODE publications in Science, Nature and PNAS). Since that time, Dr. Elnitski's research has pioneered both experimental and computational approaches to discern and validate uncharacterized regulatory components of the human genome. For example, to address the delicate interplay of silencing elements in regulating active gene expression, Dr. Elnitski developed a system to detect these elements in human sequences. The results were the first to show that negative-acting elements could be studied on a large scale in an efficient assay system (published in Genome Research).

Bidirectional promoters are now widely accepted as a mechanism of gene regulation. However in 2007, the basic set of genes with this type of regulatory structure, especially noncoding genes, was unknown. Dr. Elnitski's group elucidated this gene collection in several peer-reviewed publications (including PLoS Computational Biology and BMC Genomics and conference papers) showing the widespread and repeated occurrence of this regulatory structure. Moreover, by mapping these regulatory elements across five genomes, she and her group showed that bidirectional promoters are a basic regulatory component in mammalian transcriptional control, and that many bidirectional promoters are specific to a single species. Mapping of these uniquely occurring elements indicated the location of genomic rearrangements between species, and implicated the existence of species-specific transcripts. From this perspective, the group identified all such promoter regions that were unique to the human genome compared to other sequenced mammalian genomes and identified over 1,000 candidate human-specific genes (published in PLoS ONE).

Furthering the complexity of regulated gene expression, transcriptional splicing is an intricate and delicate process wherein mistakes can cause devastating diseases. By recognizing that splicing signals are mechanistically robust and utilize a set of common functional elements, Dr. Elnitski's group developed a new tool for elucidating unannotated splicing elements. This tool also predicts the consequences of sequence variants that change the sequence of these regulatory elements to disrupt normal splicing outcomes (published in Genome Biology). These tools emerged in time to support a new genomic paradigm, in which synonymous substitutions are increasingly recognized as disruptive events in regulated splicing scenarios. Dr. Elnitski has recently published a report on new synonymous mutations in CFTR, the gene responsible for cystic fibrosis, which likely play a role in etiology of the disease (published in Journal of Cystic Fibrosis). She also published a computational assessment of a recurrent synonymous driver mutation identified in melanoma (published in PNAS).

One of the most intriguing components of gene regulation is the epigenetic code, which influences gene expression from its positioning above the DNA sequence. Dr. Elnitski's group is studying altered epigenetic patterns of cancer samples to identify genomic loci that undergo aberrant regulation. Her work has identified genomic regions whose epigenetic state is commonly altered in epithelial tumors from 15 distinct types of cancer, providing a promising candidate for a predictive biomarker of disease (published in Epigenetics). In ongoing studies, she is pursuing the role of the methylator phenotype in tumors, characterized by extensive methylation of the tumor phenotype. The Elnitski group identified a methylator phenotype in endometrioid subtype ovarian tumors (published in PLoS ONE). Tumors with the methylator phenotype can be distinguished easily from other subtypes, and often have substantially different prognostic outcomes. Therefore, diagnostics based on DNA methylation patterns may provide efficient and economical avenues to personalized treatments. Furthermore, by studying DNA methylation profiles, Dr. Elnitski will be able to piece together the components of the functional pathways responsible for DNA methylation patterns in normal and abnormal conditions. These same ideas extend to the analysis of mouse models of human tumors. For example, one project in the lab examines the DNA methylation patterns in two versions of human endometrioid ovarian tumors, carrying PTEN-/- and APC-/- mutations or PTEN-/- APC-/- and ARID1A-/- mutations. The project addresses whether these tumors recapitulate the human phenotype, in which case they should show extensive aberrant DNA methylation.

These research projects are geared toward identifying and understanding regulatory mechanisms in a cell that could not be comprehensively addressed before the sequencing of the human genome. By studying the integrated picture of gene expression, DNA methylation and DNA mutation within a cell, Dr. Elnitski proposes to generate a comprehensive picture for elucidating disease mechanisms that encompasses cause-and-effect events.

Laura Elnitski obtained her B.S. in molecular and cellular biology at The Pennsylvania State University (Penn State), with specialty research in chemical engineering. She obtained a Ph.D. in biochemistry and molecular biology, also at Penn State, while pursuing one of the first projects to look at multi-species comparisons of noncoding regulatory elements. She was awarded a Ruth L. Kirschstein National Research Service Award fellowship from the National Institutes of Health for postdoctoral training in the Department of Computer Science and Engineering at Penn State where she focused on the development and interpretation of multispecies genomic alignments to detect conserved regulatory regions.

Dr. Elnitski joined the National Human Genome Research Institute in 2005 as a tenure track investigator. She has participated in numerous genome sequencing projects including mouse, rat, cow and chicken, as well as the ENCODE Consortium to elucidate functional elements in the human genome. Her work specializes in developing tools to identify and discern the mechanistic action of functional elements in the human genome, including promoters, enhancers, silencers, splicing elements and epigenetic regulators. She received an Outstanding Research Achievement Award at the International Symposium on Bioinformatics, Research and Applications, Harvard University in 2007, and was selected for a Genome Technology International Young Investigator Award in 2009.

In 2013, Dr. Elnitski was awarded the Faculty Mentoring Award at NHGRI. She serves as a standing member of the Genomics and Computational Biology Study Section of the NIH.