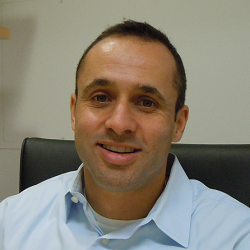 ​Our lab exploits the unique investigative opportunities provided by intracranial electrical recordings during neurosurgical procedures. Using recordings captured from epilepsy patients implanted with subdural and depth electrodes, we investigate the activation of cortical networks during memory encoding and recall.And using the recordings captured during the implantation of deep brain stimulators, we investigate the role of the basal ganglia in learning and decision making.

Dr. Zaghloul received his B.Sc. degree from MIT in 1995 and his M.D. and Ph.D. degrees from the University of Pennsylvania in 2003. His graduate work focused on developing silicon models of visual processing in the mammalian retina with Dr. Kwabena Boahen. Dr. Zaghloul completed a residency in Neurological Surgery in 2010 from the University of Pennsylvania. During this time, he completed postdoctoral research with Dr. Michael Kahana, investigating the neural correlates of human memory encoding, decision, and reward. Dr. Zaghloul has completed clinical fellowships in Epilepsy Surgery and in DBS Surgery. Dr. Zaghloul joined NINDS as a Staff Clinician in 2010, and as an Investigator in 2013. His laboratory is focused on investigating the neural mechanisms underlying human cognitive function.