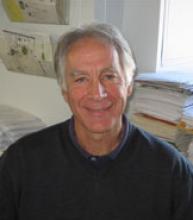 Extracellular signals modulate and regulate the function of cells that participate in immune responses. Some of these signals activate pathways that utilize heterotrimeric G proteins to transduce signals. The importance of chemokine receptor signaling in the orchestration and coordination of immune cell trafficking is but one example of the importance of heterotrimeric G-protein-mediated signaling in immune function. Our goals are to understand how G-protein-coupled receptors (GPCR) transduce signals to downstream effectors in immune cells, to discern the mechanisms that control these responses, and to determine the physiologic consequences of G-protein activation for lymphocyte function. To do so, we are using genetic modified mice that have disruption of key genes in the chemokine receptor signaling pathway and sophisticated imaging techniques including intravital two-photon laser scanning microscopy (TP-LSM). As an extension of these studies, we are also characterizing the functional roles of G-proteins, their regulators in a non-canonical G-protein signaling pathway, which employs alternative activators and effectors. Finally, we are investigating some aspects of the signaling pathway that triggers autophagy and inflammasome activation in macrophages and other cell types. Autophagy is a process that delivers cytoplasmic constituents to autolysosomes and has been linked to both innate and adaptive immunity.

A major accomplishment of BCMIS was the identification of a family of proteins that regulate heterotrimeric G-protein signaling, which have been termed RGS proteins. RGS proteins are GTPase-activating proteins (GAPs) for Gα subunits of heterotrimeric G proteins. By shortening the duration that a Gα subunit is GTP bound, the RGS proteins curtail both Gα and Gβ µ signaling. Mice lacking various RGS proteins, as well as mice lacking specific GPCRs or other components in the GPCR signaling pathway, are currently being studied. In addition, mice with GFP knock-in to either the Rgs13 or Rgs19 locus are being characterized. These later mice have proven useful to assess the cell types in which Rgs13 and Rgs19 are expressed. Recent functional studies have revealed roles for Rgs13 in regulating the early antibody response and germinal center B cells and for Rgs19 in controlling B-cell trafficking and B-cell proliferation.

We have employed intravital TP-LSM to study the lymphocyte trafficking, to examine the role of innate cells in B-cell responses, and to study antigen processing in the lymph node. We have 1) shown how changes in chemokine and sphingosine-1 phosphate receptor (S1PR) expression and signaling coordinate the homeostatic trafficking of B cells through lymph nodes; 2) shown the importance of RGS1 and Gαi2 in regulating B-lymphocyte chemotaxis and cell motility within the lymph node; 3) shown the existence of efferent lymphatics close to the lymph node follicle that support B-lymphocyte lymph node egress; 4) shown how lymph node remodeling along with cell-intrinsic factors facilitate and coordinate the trafficking of B cells into lymph node follicles, the retention of activated B cells in germinal centers, and the egress of non-antigen-activated and effector B cells; 5) defined the role of Gαi2 signaling in B-cell trafficking; 6) shown that RGS proteins are necessary to coordinate the sensitivity and desensitization of chemokine receptors; 7) the details of interactions of neutrophils with B cells in immunized lymph nodes; and 8) identified a network of cells in lymph nodes that uptake the envelope protein of HIV and deliver it to lymph node B cells.

Studies in model organisms uncovered a new G-protein signaling pathway, where the GPCR is replaced or supplemented by an intracellular G-protein activator, which triggers Gα nucleotide exchange. One such protein, called Ric-8, has been functionally implicated in embryonic cell divisions in model organisms. A mammalian homolog called Ric-8A exists, but little is known about its roles in mammalian cells. We are using a combination of gene silencing, gene overexpression, and FRET probes and sensors to examine the functional role of Ric-8 and Gα subunits in mammalian cell division and in lymphocyte function, which express significant levels of Ric-8A. These studies have implicated Ric-8 and Gαi in helping to orient the mitotic spindle during cell division. Mice that lack Ric-8A expression in their B cells have reduced amounts of Gαi and Gαq proteins, a marked reduction in marginal zone B cells, and a severe B-cell trafficking defect.

Toll-like receptors (TLRs) play an instructive role in innate and adaptive immunity by recognizing specific molecular patterns from pathogens. Engagement of several different TLR family members triggers autophagy in macrophages. Two key molecules in the TLR signaling pathway interact with Beclin 1, an essential factor in autophagosome formation. TLR signaling enhances these interactions and reduces the known binding of Beclin 1 to Bcl-2, an inhibitor of autophagy. Both interleukin 1 and TLR signaling cause the E3 ligase Traf6 to ubiquitinate Beclin 1, which has two Traf6 binding sites. A lysine residue in Beclin 1 strategically located in the Beclin 1 BH3 domain serves as a major site for ubiquitination. A20, a known deubiquitinating enzyme, reduces Beclin ubiquitination and limits the induction of autophagy following TLR signaling. These results indicate that the status of Beclin 1 K63-linked ubiquitination plays a key role in regulating autophagy during inflammatory responses. Recently, we have some evidence that inflammasomes undergo ubiquitination and autophagic destruction, which can limit inflammasome mediated IL-1β secretion. Severe acute respiratory syndrome-coronavirus (SARS-CoV) has been identified as the etiologic agent of the 2002-3 international SARS outbreak. We have found that one of the open-reading frames of the virus, ORF-9b, targets mitochondria, which causes mitochondrial elongation and autophagy and disrupts mitochondrial signaling. A second open reading targets the NLRP3 inflammasome, causing spontaneous inflammasome activity.

Dr. Kehrl graduated from Wayne State Medical School, completed his medical residency in internal medicine at Yale New Haven Hospital, and held fellowships in both infectious diseases and allergy-immunology in the Laboratory of Immunoregulation. Dr. Kehrl is currently a tenured senior investigator and a member of the research officers group in the Commissioned Corps of the U.S. Public Health Service. Dr. Kehrl was appointed chief of the LIR B-Cell Molecular Immunology Section (BCMIS) in 1993. Under his supervision, his laboratory has gained international recognition for its studies of human and murine B lymphocytes and the function and regulation of heterotrimeric G-protein signaling in lymphocytes and other cell types.