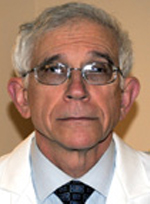 Dr. Moss’s basic research focuses on the regulation of protein trafficking by guanine nucleotide-binding proteins and their associated regulatory molecules and post-translational modifications of proteins by ADP-ribosylation. His clinical trial work focuses on the pathogenesis of cystic lung diseases, such as lymphangioleiomyomatosis (LAM).

Early in his career, Dr. Moss and collaborators discovered that the bacterial toxin, cholera toxin, exerted its effects on mammalian cells by ADP-ribosylation, the transfer of an ADP-ribose group from NAD to an acceptor molecule. He later discovered that mammalian cells contain endogenous enzymes with activities that mimic the ADP-ribosyltransferase activity of cholera toxin. Subsequently, in trying to determine why the ADP-ribosyltransferase activities of mammalian cells are not toxic, Dr. Moss identified ADP-ribosylarginine hydrolases (ARHs), enzymes that release the ADP-ribose moiety from its acceptor. Exquisite control by ARTs and ARHs makes physiological ADP-ribosylation an effective cellular regulatory mechanism with multiple diverse functions.

Dysregulation of ADP-ribosylation is, conversely, a hallmark of disease. Dr. Moss and colleagues demonstrated that ADP-ribosylation neutralizes the defensin HNP-1, a key effector of the innate immune system that is secreted by neutrophils to kill microorganisms. ADP-ribosylated HNP-1 was identified in the airways of patients with pulmonary disease (e.g. asthma and pulmonary fibrosis) but not in healthy individuals. Further, ADP-ribosylation of arginine was shown to result in the irreversible conversion of the arginine to ornithine, a non-coded amino acid. In cholera, the toxin-generated level of intestinal cyclic AMP system activation is significantly greater than normally observed. Dr. Moss and his colleagues showed that in mice lacking the opposing ARH, ARH1, the effects of cholera toxin were demonstrably amplified. More recently, Dr. Moss’s laboratory has shown that mice lacking ARH1 spontaneously develop multiple tumor types, indicating a role for ADP-ribosylation in cancer. Dr. Moss and colleagues subsequently showed that other ARH enzymes participate in the responses of cells to oxidative stress. He and his team are studying multiple mouse models of disease involving ADP- ribosylation-related genetic knockouts to further elucidate the role of these systems in health and disease.

Given an opportunity to begin a clinical program in parallel with his basic research, Dr. Moss chose to focus on LAM, a disorder characterized by the slow cystic destruction of the lung, affecting women of reproductive age. LAM results from the proliferation of abnormal smooth muscle-like cells and occurs with elevated frequency among women with tuberous sclerosis complex, an autosomal dominant syndrome caused by mutations in the TSC1 or TSC2 gene. Dr. Moss and his colleagues initially established the natural history of LAM and the molecular and cellular phenotypes of the LAM cell, the cell responsible for the destruction of the lung parenchyma. Dr. Moss and colleagues took part in a multicenter study showing that sirolimus, an inhibitor of the mammalian target of rapamycin (mTOR), could stabilize lung function. They went on to report that sirolimus therapy resulted in the resolution of the lymphatic manifestations of LAM.

Dr. Moss and his colleagues have extended their study of LAM to include other destructive lung diseases.

Joel Moss graduated summa cum laude from Brandeis University in 1966 with a B.A. in chemistry and earned his M.D. and Ph.D. degrees from New York University School of Medicine in 1972. Following internship and residency at Johns Hopkins Hospital, Dr. Moss joined the NHLBI in 1974 as a research associate and pulmonary fellow. Since 2007, he has been head of the Translational Research Section and of the Lymphangioleiomyomatosis (LAM) Research Program. Dr. Moss has received multiple awards, including LAM Foundation Award (1999 and 2010), and the New York University Alumni Achievement Award in Basic Science in 2009. Dr. Moss is an honorary member of the Peruvian Thoracic Society and received the Chiba (Japan) Medical Society Award. He is also a member of American Society for Clinical Investigation for which he was a Councillor and Vice-President. In 2009, Dr. Moss was elected to the Johns Hopkins University Society of Scholars. He is a Fellow of the American College of Chest Physicians. Dr. Moss has authored or coauthored more than 630 papers, edited and co-authored several books and is a co-inventor of several patents. Dr. Moss has been an editor of the Journal of Biological Chemistry and the Journal of Clinical Investigation. He is currently an Editor of the American Journal of Respiratory Cell and Molecular Biology and is a designated Associate Editor of CHEST through 2015.