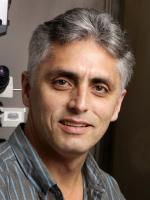 In the Ion Channel Physiology (ICP) group, we study the cys-loop receptor/ ligand-gated ion channel superfamily, with a particular emphasis on the nicotinic acetylcholine (ACh) receptor channels (nAChRs), as well as the muscarinic ACh (mAChRs) G protein-coupled receptors (GPCRs). The nAChRs are permeable to cations, so that when they are activated by ACh, they open and depolarize the cell, stimulating electrical firing. Some nAChRs are also permeable to calcium ions, and this increase in cytoplasmic calcium levels can affect signal transduction cascades, plasticity, and gene transcription. The mAChRs are GPCRs and couple to various intracellular signaling cascades.

The nAChRs are widely expressed (in neurons and in non-neuronal cells) throughout the brain, both on postsynaptic membranes, where they mediate synaptic transmission by cholinergic neurons, and on presynaptic terminals where they regulate release of other neurotransmitters. The nAChRs are essential for a variety of fundamental brain functions, including cognitive processing, learning and memory formation, and development. Dysfunctions in nAChR function have also been linked to a variety of neurological disorders and diseases, including Alzheimer's disease (AD), Parkinson's disease (PD), epilepsy, and schizophrenia. Neurodegenerative diseases, such as AD and PD, are thought to be due to both genetic and environmental causes. In fact, the genetic evidence to date indicates that only a small percentage of early onset cases can be accounted for by inherited mutations, strongly suggesting that there is a major environmental influence on the etiology of these diseases. Environmental agents have been shown to generate PD-like symptoms, cognitive problems, or other neurological outcomes, either via direct or indirect action on cholinergic receptors in the brain. The goal of the ICP group is to elucidate the role nAChRs play in the pathology of neurological diseases and disorders. Besides understanding the pathology of serious diseases afflicting millions of Americans, this information may also aid in the development and design of therapeutics to treat or mitigate the symptoms of nAChR dysfunction.

We use a variety of electrophysiological techniques (e.g. patch clamp and two-electrode voltage-clamp) in combination with a variety of fluorescent imaging techniques, in order to record the electrical activity of living cells in situ in real time. Most of the work of the ICP groups involves direct recordings from neurons in living brain slices, which retain many of their synaptic and glial cell contacts, in order to study native nAChR function in a more natural environment. We also study nAChRs expressed in Xenopus laevis oocytes or other cell culture model systems. In addition, we also utilize several innovative techniques, such as single-cell RT-PCR, UV laser-based photolysis of caged neurotransmitters, voltage-sensitive dye imaging, voltammetry, and optogenetics, in order to study directly network excitability in brain slices.

Dr. Yakel received his B.S. from Oregon State University, and his Ph.D. from the University of California, Los Angeles, where he studied ligand-gated ion channels and serotonin receptors in cultured hippocampal neurons and cell lines with Meyer Jackson. During a postdoctoral fellowship with Hersch Gerschenfeld at the Ecole Normale Superieure (Paris, France), he investigated the regulation of voltage-gated calcium channels by G protein-coupled receptors. During a second postdoctoral stage at the Vollum Institute with Alan North and Tom Soderling, he studied the function of regulation of ligand-gated ion channels. Dr. Yakel joined NIEHS as an investigator in 1993, and is currently a Senior Investigator in the Laboratory of Neurobiology. His laboratory explores the function and regulation of ligand-gated ion channels, in particular the neuronal nicotinic receptor channels, in the hippocampus.