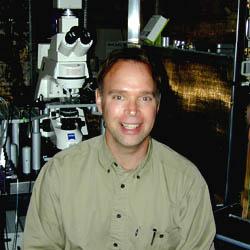 Research in this section is directed toward understanding brain mechanisms underlying the generation and control of innate motor behavior in the mammalian CNS. One of the fundamental challenges in contemporary neuroscience is to explain the generation of behavior in terms of the cellular and neural network properties of neural systems. Networks generating movement, particularly those producing innate rhythmic motor behaviors such as breathing and locomotion, provide important model systems to address this problem. We study brainstem networks producing rhythmic breathing movements. Our long-range goal is to explain the neurogenesis of respiratory movements at the molecular, biophysical, synaptic, and network levels. The respiratory network is one of the few neural systems that can generate behaviorally relevant patterns of neural activity in highly reduced preparations of the mammalian CNS. This attribute has enabled us to develop unique in vitro preparations (e.g. see Koshiya and Smith, 1999), including brain slice preparations, that retain active respiratory networks, allowing concurrent measurements at cellular, synaptic, and network levels in the context of behaviorally meaningful network activity.

Our current in vitro studies focus mainly on mechanisms generating the neural oscillation underlying the rhythm of breathing. We are conducting interrelated studies to determine biophysical properties, morphology, network architecture, and synaptic interactions of the rhythm-generating neurons in the pre-Botzinger complex, the brainstem locus of rhythm generation (Smith et al., Science 254: 726-729, 1991). Our experimental techniques include whole-cell patch-clamp recording for studies of biophysical and synaptic properties, infrared and fluorescence videomicroscopy for real-time imaging of single cell and neuron population activity with calcium-sensitive dyes (Koshiya and Smith, 1999), and computational modeling of neurons, synapses, and networks (Butera et al., 1999).

Dr. Smith received his B.S. degree from the University of Maryland and his Ph.D. degree from Johns Hopkins University. After postdoctoral research in physiology at Harvard University, Northwestern University, and a Humboldt Fellowship at the University of Göttingen, Germany, in 1991 he became a faculty member in the Department of Physiological Science and Interdepartmental Program in Neuroscience at the University of California, Los Angeles. Dr. Smith moved to NINDS in 1994. His laboratory is studying the functional and computational properties of oscillatory motor networks in the mammalian brainstem and spinal cord.

This page was last updated on Wednesday, January 4, 2023