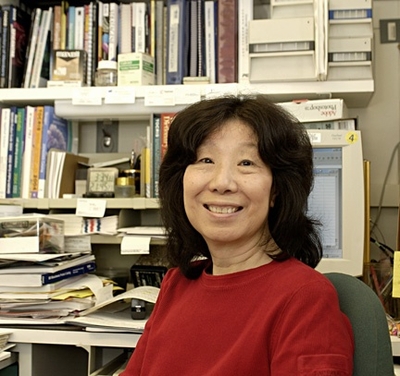 We conduct research to delineate the pathophysiology and develop novel therapies for the two major subtypes of type I glycogen storage disease (GSD-I), GSD-Ia and GSD-Ib. GSD-Ia is caused by a deficiency in the liver/kidney/intestine-restricted glucose-6-phosphatase-α (G6Pase-α or G6PC) and GSD-Ib is caused by a deficiency in the ubiquitously expressed glucose-6-phosphate transporter (G6PT or SLC37A4). G6Pase-α is an endoplasmic reticulum (ER) transmembrane protein that regulates intracellular glucose production by catalyzing the hydrolysis of G6P to glucose and phosphate. The active sites of G6Pase-α faces into the ER lumen and depend on G6PT, another ER transmembrane protein, to translocate G6P from the cytoplasm into the lumen. To function, G6Pase-α must couple with G6PT to form a functional G6Pase-α/G6PT complex that maintains interprandial glucose homeostasis. GSD-Ia and GSD-Ib patients manifest a common metabolic phenotype of impaired glucose homeostasis and a severe long-term complication of hepatocellular adenoma/carcinoma (HCA/HCC). There is no cure for GSD-Ia and GSD-Ib. We have generated animal models of both disorders which are being exploited to both delineate the disease more precisely and develop new treatment approaches, including gene therapy. We have also generated several efficacious G6Pase-α- and G6PT-expressing recombinant adeno-associated virus (rAAV) vectors and provided a proof of principle gene therapy in murine GSD-Ia and GSD-Ib that is safe, efficacious, and appropriate for entering clinical trials. In 2018, our rAAV-G6PC/rAAV-co-G6PC vector (US patent #9,644,216; European patent # EP3074510) technology was licensed to Ultragenyx Pharmaceutical Inc (Novato, CA) who are currently undertaking a phase I/II clinical trial for GSD-Ia (NCT03517085). The initial dose-escalation trial is currently in progress and no safety issues have been reported to date. We have begun to explore alternative genetic technologies for GSD-I therapies. We have established formal collaborations under the CRADA with CRISPR Therapeutics (Cambridge, MA) and Beam Therapeutics (Cambridge, MA) to evaluate the efficacy of CRISPR/Cas9-based and adenine base editor (ABE)-based gene editing systems, respectively, to correct gene specific G6PC mutations in animal models of GSD-Ia.

Dr. Janice Y. Chou is the Section Chief on Cellular Differentiation, NICHD. Her scientific career has been dedicated to accelerating basic science discovery to elucidate disease pathophysiology, to develop therapeutic approaches, and then to undertake preclinical proof of mechanism studies that translate that work into clinical benefits for patients. Dr. Chou conducts research to understand the molecular genetics and pathogenesis of glycogen storage diseases type Ia (GSD-Ia), deficient in glucose-6-phosphatase-α (G6Pase-α or G6PC); GSD-Ib, deficient in the G6P transporter (G6PT or SLC37A4); and GSD-Irs, deficient in G6Pase-β (or G6PC3). GSD-Irs is also known as severe congenital neutropenia syndrome type 4. Using transgenic mouse models, Dr Chou has pioneers preclinical development of gene-based therapies for these disorders. Her rAAV-mediated gene therapies in murine GSD-Ia and GSD-Ib have provided proof of principle studies that establish gene therapy for GSD-Ia and GSD-Ib to be safe, efficacious, and appropriate for entering clinical trials. In 2018, her GSD-Ia rAAV vector technology (US patent #9,644,216; European patent # EP3074510) was licensed to Ultragenyx Pharmaceutical Inc (Novato, CA) who is currently undertaking a phase I/II clinical trial for GSD-Ia (NCT03517085). The initial dose-escalation trial is currently in progress and no safety issues have been reported to date. She continued improving the vector technology and generated a novel rAAV-G6PC-S298C vector (US patent #10,415,044; European patent # EP3236984) with increased efficacy and devoid of potential problems associated with codon-optimization that may reduce efficacy. Dr. Chou received her Ph.D. degree in Biochemistry from the University of Utah and began her postgraduate scientific career at NIDDK, NIH. She then joined NICHD and was promoted to Section Chief in 1983. During her career at the NIH, Dr. Chou has made contributions across a wide area of gene regulation and cellular differentiation, including the development of some of the first temperature-sensitive cell lines, the elucidation of the mechanism of cell transformation, and the characterization of gene regulatory sequences and transcription factors in the context of developmentally regulated genes. Since 1993, her research has focused on the molecular genetics of human heritable disorders. She has established the genetic basis of GSD-Ia, GSD-Ib, GSD-Irs, and methionine adenosyltransferase deficiency as well as developed gene therapy for GSD-Ia and GSD-Ib. Dr. Chou holds several patents and has served as a member of the Personnel Promotion Committee at NICHD, the Selection Committee of the Reproduction Scientist Development Program, and the Association for Glycogen Storage Diseases. She has received a Superior Service Award from the US Public Health Service and a Scientific Achievement Award from the Chinese Medical and Health Association. She was also cited in the Maryland Women's History Resource Kit. In recent years Dr. Chou delivered the Plenary Lecture of the International symposium on hepatic GSDs in Lyon, France, 2012, The EMG Lecture in Groningen, The Netherlands, 2013, and Gene Therapy in GSD, Groningen, The Netherland, 2017, the Special Lecturer in Summer School Pediatrics, UMC Groningen, The Netherlands, 2019, and the NIH Director’s Award in 2021.Dr. Chou has authored over 200 peer-reviewed scientific papers, review articles, and book chapters.