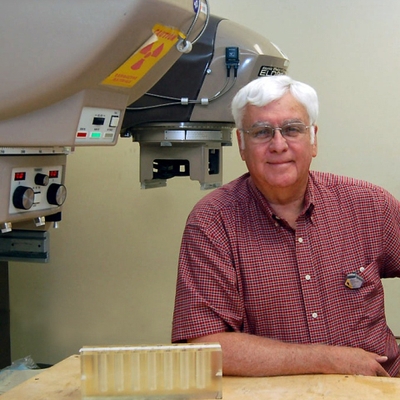 Modification of the Radiation Response

My research is directed toward the discovery of ways to modify the radiation response of both normal and tumor tissue. Such modification can be important for the improvement of cancer treatment using ionizing radiation either by protecting normal tissues or enhancing the sensitivity of tumor. Further, identifying means to protect normal tissues, particularly against radiation-induced late effects such as carcinogenesis, is important for countermeasure considerations of large populations exposed to radiation or in patients at risk for second malignancies following successful radiotherapy.

With respect to enhancing the effects of radiation damage to tumors, a number of approaches are being evaluated including molecularly targeted agents and cytotoxic chemotherapeutic agents. The overall objective here is to obtain a therapeutic gain by providing selective radiosensitization in tumors as compared to normal tissues. Admittedly, this has been and continues to be a difficult goal to achieve. We are presently evaluating in human tumor cell lines and xenografts inhibitors of JAK/STAT, CK2, Chk-1, a dual PI3K/mTOR inhibitor, the chemotherapy agent eribulin, and a hypoxia-mediated cytotoxin. Studies include the effects of the agent combined with radiation on survival, DNA damage repair, and cell cycle perturbations coupled with the effects of the combination on specific signal transduction pathways.

Our laboratory was first to identify nitroxides (lead compound Tempol) as catalytic antioxidants and radiation protectors providing protection against oxidative- and radiation-induced damage. Extensive pre-clinical studies are directed to normal tissue radioprotection using systemically or topically applied Tempol to protect against oral mucositis and salivary gland damage resulting from cisplatin-based chemoradiation in mice without interfering with tumor response. Studies are also directed to better define the mechanism of Tempol-mediated weight reduction in mice. Tempol has been shown to inhibit adipogenesis in 3T3-L1 cells resulting in a reduction in cellular lipid storage concomitant with HIF-1 induction. Tempol has been shown to delay the onset of cancer in various knock-out animal models (most recently in a Fanconi's anemia mouse model) prompting a study to determine if Tempol food supplementation could enhance survival and decrease radiation-induced carcinogenesis in mice receiving total body irradiation (TBI). Preliminary findings indicate that chronic supplementation of Tempol in the diet of mice over their life span can reduce body weight without toxicity, decrease cancer, and extend survival when administered immediately after non-lethal total body radiation (TBI). Delaying administration of the Tempol diet 1 month after TBI also enhanced survival and decreased carcinogenesis, suggesting that there may be a considerable "progression" phase of TBI-induced cancer induction that is amenable to modification and/or intervention.

Future studies will acquire gene expression and cytokine profiles on selected normal tissues taken from mice treated with various combinations of the Tempol diet and TBI (both at different times pre- and post-treatment) to gain insight as to the mechanism(s) of Tempol-mediated effects relative to TBI-induced carcinogenesis. Our research has demonstrated that nitroxides are a versatile class of antioxidants and our future studies will be centered on better understanding their mechanism of action as well as conducting the necessary studies to move them toward clinical trials where indicated.