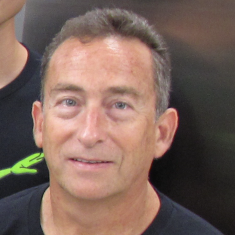 Cell-cell adhesion maintains intercellular connections between neighboring epithelial cells for normal morphogenetic movements during development. Disruption of this critical process is also one of the earliest steps in metastatic progression of cancer cells. Our laboratory has focused on providing mechanistic insights into how the Eph/ephrin signaling system affects cell-cell interactions; specifically, how the ephrinB transmembrane ligands send signals affecting cell-cell junctions, adhesion, and cell movement. This signaling affects morphogenesis during development, as well as tumor cell invasion in the disease state. We often employ the Xenopus system since we have found it to be a powerful tool for understanding the contribution of several signaling molecules to developmental and cellular processes. Thus, Eph/ephrin and Wnt/Planar Cell Polarity signal transduction can be assessed morphologically, histologically, as well as biochemically in a developing vertebrate. Although the bidirectional signaling between ephrinBs and their receptors is quite complex, it is clear that control of the expression and interplay between these proteins may have important effects on malignant transformation and metastatic progression. Our future direction is aimed toward a mechanistic understanding of the cross-talk between the Wnt and Eph/Ephrin systems; using an interdisciplinary approach to research by integrating the use of biochemical and developmental techniques to further our studies.

Dr. Ira Daar obtained his Ph.D. degree from the State University of New York at Buffalo under the supervision of Dr. Lynne Maquat. There he investigated the molecular defects underlying common glycolytic enzyme deficiencies, and performed some of the earliest studies on nonsense- mediated mRNA decay. He obtained his postdoctoral training with Dr. George Vande Woude at NCI, investigating signal transduction events and cell cycle control points influenced by oncogene function. His present work focuses on signal transduction pathways that regulate cell-cell adhesion and cell movement.