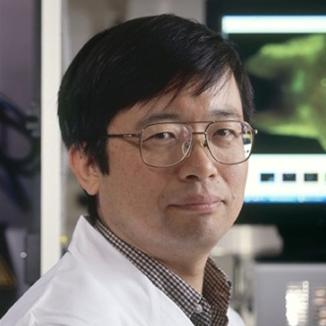 The Laboratory of Molecular Theranostics (LMT), led by Hisataka Kobayashi, MD, PhD, is a major basic research section of the Molecular Imaging Branch. It focuses on the development of imaging and theranostic probes with a particular emphasis on optical probes. Since its inception, the LMT has sought to develop probes that could aid in the detection of tumors, for instance, during surgical resections or endoscopy. In the course of investigating new near infrared (NIR) fluorophores we discovered a dye, IRDye700DX (IR700), that when conjugated to an antibody was highly lethal only to targeted cells after NIR light exposure, yet, had almost no off-target toxicity. We termed this phenomenon “near infrared photoimmunotherapy”. Near infrared Photoimmunotherapy (NIR-PIT) is quite different from the conventional photodynamic therapy (PDT), a cancer treatment that has been used for decades with only modest success. In NIR-PIT, the agent must bind to the cell membrane and does not need to be internalized. Using moderate power NIR light, such as that produced by light emitting diodes (LEDs), highly effective cell killing occurs with extremely high specificity likely due to photo-chemical reactions in the cellular membrane. Therefore, NIR-PIT-treated cancer cells die by necrosis, releasing highly antigenic intracellular contents leading to immunogenic cell death that initiates immunity against surviving cancer cells, even those at a distance from the treatment site. We patented NIR-PIT and soon licensed it to the Aspyrian Therapeuctics Inc., a small biotech startup in San Diego, and helped them to start a first-in-human Phase I clinical trial in inoperable head and neck cancer using the photo-immunoconjugate cetuximab-IR700 beginning in mid-2015 (RM-1929). While this initial conjugate targets EGFR, this target is only the first of many possible antibody-photoabsorber conjugates and given the diversity of existing antibodies and its ability to be combined with other therapies, NIR-PIT could have broad application across many tumor types. We have performed extensive preclinical studies evaluating the therapeutic potential and optimizing the regimen of dosing photo-immunoconjugates including with cancer stem cells. Another aspect of NIR-PIT is that it can be directed against targets in the tumor microenvironment including immuno-suppressor cells, and tumor infiltrating fibroblasts, etc. that represent alternative or complimentary approaches for NIR-PIT based cancer therapy.

In addition to NIR-PIT we continue to investigate activatable optical probes for diagnostic purposes. Initially, optical probes we designed were targeted “always on” probes similar to nuclear medicine probes without the radiation. An inherent limitation of such probes is their high background signal from the unbound probe. We could circumvent this background signal by choosing to image body spaces, such as the peritoneum, in which the targeted tissue would bind the agent and fluoresce but the unbound probe would be absorbed rapidly and exit the space, leading to high tumor-to-background ratios. This led to some potentially useful probes for ovarian cancer metastases in the peritoneum. However, such background clearance could take hours to days rendering the probes impractical. We therefore, have been working on a series of activatable optical probes that only fluoresce under certain conditions found in tumors, such as specific enzymes.  These agents result in very high target to background ratios greatly improving the sensitivity of the optical probes.  They can be administered to the surface of the bowel, peritoneum or other body surface and rapidly convert into fluorescing molecules in the presence of small implants of tumor. This may be very useful in assessing resection margins and in guiding surgeons and endoscopists to sub-visible tumor locations that would otherwise be missed.

The LMT is rich learning environment for scientific inquiry and for addressing translational problems. We have trained numerous young scientists who have gone on to do their own research at other centers. Training is an important part of the mission of the LMT.

Dr. Hisataka Kobayashi is a tenured senior investigator in the Molecular Imaging Branch at the National Cancer Institute/ NIH in Bethesda, MD. Dr. Kobayashi was awarded an M.D. and Ph.D. (Immunology/Medicine) from Kyoto University, Kyoto, Japan.  His interest is in developing the novel molecular imaging and therapeutic agents or technologies especially for targeting cancers. He has published over 250 scientific articles in clinical and preclinical bio-medical imaging over the last 20 years.