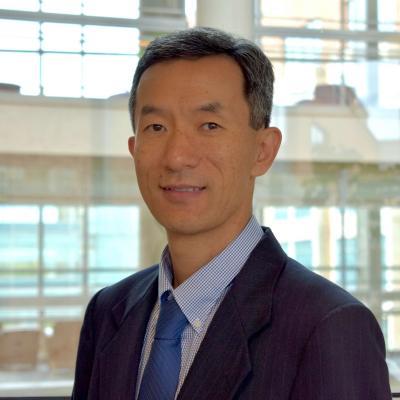 Whether through ultrasound, x-rays, or magnetic resonance imaging (MRI), the ability to peer noninvasively into the human body has been an enormous boon to medicine. New technological advances provide an expanding horizon of better diagnostics through imaging. Dr. Wen's primary research focus is the development of biomedical imaging and microscopy technologies. He applies physics discoveries to engineer novel solutions to challenges in medical imaging.

Dr. Wen also has a longstanding interest in MRI. He and his colleagues previously developed a protocol to measure the function of the myocardium at very high spatial resolution. This technology has since been licensed and used in clinical laboratories. The sensitivity of the technology has allowed his clinical collaborators to detect early signs of weakening myocardial function in patients with type II diabetes. It is also used as a standard to validate other ultrasound and MRI techniques of tissue movement and function.

In the early days of high field MRI Dr. Wen studied extensively the behavior of electromagnetic wave propagation in the human body and contributed to our understanding of the benefit and challenges of high field MRI today. While studying the interaction of MRI RF fields with the body, he realized that the effect offered an opportunity to non-invasively image the electrical properties of the human body with MRI. Those properties reflect physiological conditions such as water and electrolyte content. His theoretical work and experimental demonstration laid the groundwork for a subfield of MRI called MR electrical property tomography (MR EPT), which is advancing rapidly in recent years with the rise of ultra-high field MRI.

In addition to his interest in diagnostic applications, Dr. Wen is also interested in basic discovery research with broad potential. In the 1990s, he and his colleagues invented Hall-effect imaging and explored its 3D capabilities, an ultrasonic method for noninvasively sensing the passive electrical properties of tissues. This work opened a field of research now called magneto-acoustic imaging, which are actively pursued by several laboratories as technological advances have made it more feasible in application.

More recently, Dr. Wen and his colleagues focus on improving the information available in x-ray images at much lower levels of radiation than currently applied. X-ray imaging is relatively inexpensive, robust, and adaptable to almost any environment (e.g. mobile imaging stations), but the use of ionizing radiation can pose health risks. Dr. Wen's laboratory is developing phase-sensitive and high resolution x-ray imaging techniques to enrich the information from x-ray scans while reducing the doses to safer levels. They discovered a basic physics effect that lead to highly sensitive imaging devices at low radiation doses.

Han Wen graduated from Peking University in Beijing with a B.S. in physics earned his Ph.D. in physics from the University of Maryland through the CUSPEA Scholarship. Dr. Wen has been a principle investigator at NIH since 1997. He has served on the editorial boards of Magnetic Resonance in Medicine and Scientific Reports, as well as a number of professional societies. Some of his honors include National Heart, Lung and Blood Institute Director's Award, the Orloff Science Award and Distinguished Service Award to the ISMRM Society as a Reviewer for MRM.