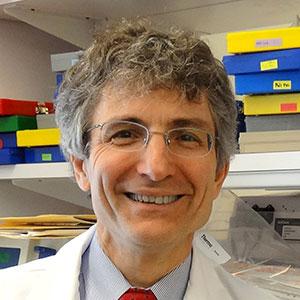 The function of the kidney critically depends on the proper structure of its tubule system, yet regulation of tubular diameter is a poorly understood phenomenon. Cystic diseases of the kidney offer unique opportunities to study these processes. My research focuses on the molecular basis of renal cystic disease and renal tubular morphogenesis.

Autosomal dominant polycystic kidney disease (ADPKD) affects approximately 1/1000 Americans. Cysts arise at all stages of life, and gradually expand to replace normal renal parenchyma. This process results in end stage kidney failure (ESKF) in approximately half by the 6th decade, accounting for approximately 5 percent of all cases of ESKF. Autosomal recessive polycystic kidney disease (ARPKD) is rare (1/20,000) but often more severe. Therapies for both are limited to managing the complications. We have, however, made great progress in understanding their pathobiology and the role of the normal PKD gene products in regulating tubular morphology.

Mutations in either of two genes, PKD1 and PKD2, cause most forms of ADPKD. Mutations appear to compromise gene function, and much data implicate a molecular recessive model as responsible for initiating cyst growth. PKD1 and PKD2 encode components of a receptor-channel complex that likely has ciliary and non-ciliary functions. Using orthologous mouse models, we have demonstrated unsuspected, complex development-stage specific consequences of Pkd1 inactivation that are linked to metabolic pathways. These models also have been used to show that PKD genes are essential for proper form and function of multiple other organs. We are pursuing several parallel lines of inquiry regarding the relationship between PKD proteins, cellular metabolism, matrix, and planar cell polarity pathways.

ARPKD is a second interest. We identified the gene mutated in this disorder, PKHD1, and have shown that it likely encodes a very large membrane-associated protein that undergoes Notch-like proteolytic processing. We have developed a series of mouse lines and cell culture systems to model the disease and study the protein, and we have shown genetic interaction between the PKD1 and PKHD1 loci. Current efforts are focused on determining its function in kidney and liver development.